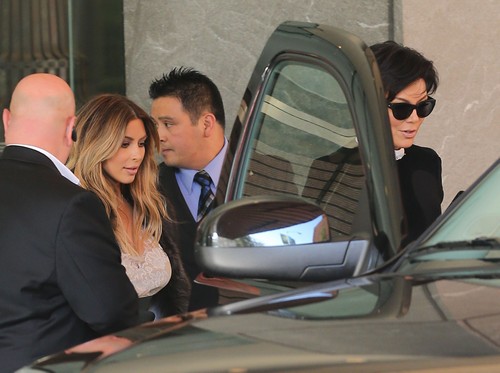 Now that the world’s most self-centered people, Kim Kardashian and Kanye West, are officially engaged, one’s mind becomes swirled with wonder; when will the wedding take place? Where? Who will be on the guest list? Do they have any friends other than business associates and paid assistants?

I decided to look into the matter of the guest list because the uncertainty was sure to plague me enough to keep me awake tonight, and every night, until I had some answers. After poking around, I still have no answers, but gleaned enough information so that I can sleep.

Paris Hilton might be a possibility since she and Kim are friends, and of course Kim’s best paid friend Jonathan Cheban. Brittny Gastineau will also be there, but who else could the future Mrs. Voice Of This Generation invite?

Among the invitees for the Kris Humphries fiasco were a series of B-listers, clothing designers, and athletes: Eva Longoria, Ryan Seacrest, Demi Lovato, Lindsay, Ali, and Dina Lohan, Vera Wang, and Serena Williams. There is no apparent reason why these same people wouldn’t be included in Kim’s newest round of celebrations of self-absorption. Hopefully, Kim kept a copy of this old guest list. All she will have to do is have her assistant print it and comb through it to see if anyone needs to be excluded for not giving Kim an expensive enough present the last time.

For Kanye’s part, he’s never before been wed, so he will have to work a little harder to decide who is worthy enough to be in his presence for such a special day. Some possibilities include Jay-Z and Beyonce (although rumor has it Beyonce dislikes Kim and might not attend), maybe Diddy, Will Smith and family, and apparently some Silicon Valley billionaires who were also present for the ridiculous spectacle that was Kim and Kanye’s proposal.

Speaking of the proposal, why did Kim look so dead-in-the-eyes? It was supposedly a very happy affair, and yet, in every picture, Kim looks like a zombie. There is no light in her eyes at all. Maybe it’s because she realized she’s about to walk down the aisle with a buffoon who can’t even spell, ‘please’.

We will report on the details as they unfold. Kris Jenner is going to love this and will most likely leak information to the press in order to keep Kim’s name at the top of every Google search.

I’ve got to ask–would you attend this wedding? I’ve got to say I would not especially if I had been a guest at Kim’s made-for-television wedding to Kris Humphries. To be a participant in that mess, then to give an unnecessary, overpriced gift, only to have the marriage dissolved 72 days later, I would not exactly jump at the chance to go through that again. This writer works too hard for the money, you know? Plus, I detest wastes of time and weddings are boring. I would rather stay home and knit.

Who do you think will be invited this time? Will it be a big shebangabang or a small, intimate party? Will it be televised? Will they sell their pictures to People? Please make your voice heard in the comments below.