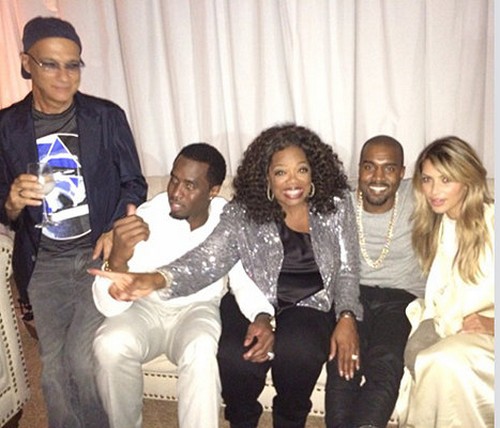 Kim Kardashian took a break from booty shots, and ignoring Kanye West’s body order, in order to party with Jimmy Iovine. North West’s blonde mommy famewhores once again, and you know she had to gloat on social media. Kim didn’t mind skipping the Emmy Awards, and dissing the iHeartRadio Music Festival, but showed up with Yeezy to ball with some true Hollywood players. You can see Kim in the pic above looking like a hungry hyena as she decides which superstar to photobomb next.

Okay, so you’ve heard Kimye fired her publicist because she’s so embarrassed by her mom, Kris Jenner’s, cancelled show, and her sister, Khloe Kardashian’s, dope fiend husband. Showbiz insiders say she and West are trying to befriend David and Victoria Beckham, and folks on that level. Kim thinks Kanye can change her image, and they want to be respected like Jay-Z, and Beyonce.  And I want to be J.K Rowling….

Will Kim Kardashian be able to successfully parlay her reality hoe empire into a legitimate career in Hollywood’s sticky sheets? Will Kanye West realize the world is over his boastful rants and in fact think he is an idiot? Will Kimmy’s blonde hair ever make her Beyonce? Why didn’t Kim Kardashian bring her sisters Kourtney and Khloe or even Kendall Jenner along to the party? Was she afraid they’d make her look fat?