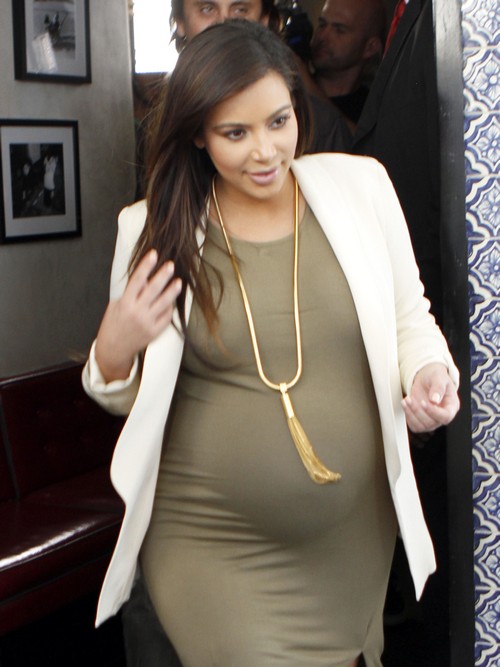 The whole time Kim Kardashian was pregnant we constantly heard about her weight gain. It was almost easy to forget that Kimmie was about to welcome a baby and become a first time mom because all of the focus was on her size. It wasn’t so much the media that did this as it was that Kim did it to herself. As she focused on feeling huge so did the press.

Now according to the July 22nd print edition of In Touch, Kim is completely focused on dropping more than 60 pregnancy pounds. She still hasn’t been cleared for exercise yet which would lead me to believe that North West must have been delivered by C-section, but Kim is already trying to say no to all of those goodies that people have been sending her way.

Kim supposedly has already dropped quite a few pounds and intends to unveil a fabulously sexy body 3 months after delivering her daughter. I’m going to go out on a limb and bet that this unveiling is probably more important to Kim than finally introducing her daughter to the world.

At the other end of the spectrum is Jessica Simpson who seemed to learn her lesson after packing on a gaggle of weight with her first child. The second time around Jess only gained 35 pounds before delivering her knew son Ace Knute on June 30th. She is headed back to Weight Watchers to help her lose the pounds and rather than wanting to show the world her body, she is planning to squeeze into a wedding dress early next year. That is her big motivation for dropping those pounds in a healthy way.

We already know that Jess can whip herself back into shape but do you think that Kim will be able to do the same? Tell us your thoughts in the comments below!