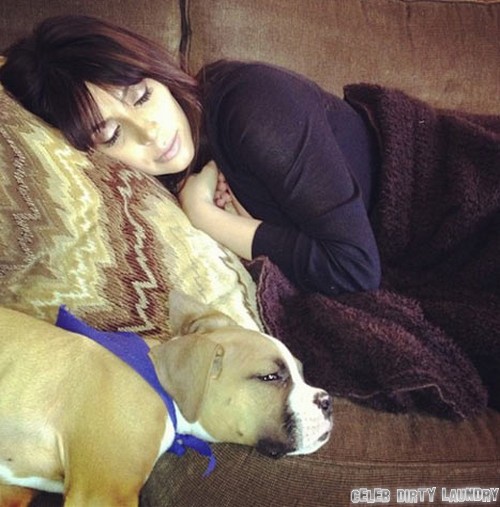 Kim Kardashian must be tired of hunting down paparazzi to snap her photo, and “leaking” her whereabouts to the media. She officially released her first picture since giving birth to Blue Ivy’s competition, North “Nori” West.  The media hog gave birth several weeks early, after a report of her egomanic baby daddy, Kanye West, cheating with a groupie flamed the tabloids.

In the picture, she’s resting along side her sister’s boxer puppy, Bernard.  The photo displays a freshly Botoxed face with her eyes closed as if she’s resting.  You almost believe she really is resting, but we know Kim would never go anywhere without her camera, lighting, and make up crew.  Insiders claim, that she’s jealous of Nori already.  That explains why she wasn’t named Kardashian, and why the picture is only of the booty-ful dark haired Armenian narcissist.

While her sister Kourtney took naturally to motherhood, Kim’s entire pregnancy was a bloody war between the health of her child, and the struggle to literally EAT headlines while maintaining her reality show empire.  The Spanx Queen is no stranger to hard work.  She gained her Hollywood status the old fashioned way – sex and surgery.  Her own mother reportedly sold the infamous sex tape to the porn company.  That tape, which featured her giving Brandy’s brother, Ray J a blow job, propelled her to Hollywood royalty.  As a new mom, most people question if her fame will take a back seat to her kid.  Or if the kid will join the circus like Mason and Penelope.

Now with the stress of a recent divorce, a new baby, and a cheating new boyfriend, Kim Kardashian is rightfully exhausted.  Luckily, she has Bernard, the boxer K9 there while Kanye West follows Jay-Z and Beyonce around town.  Bernard is a great licker, I’m sure.  Holding the camera while he licks her, however, may prove to be difficult.