Kim Kardashian’s Pregnancy Does NOT Give Kris Humphries Paternity Hopes 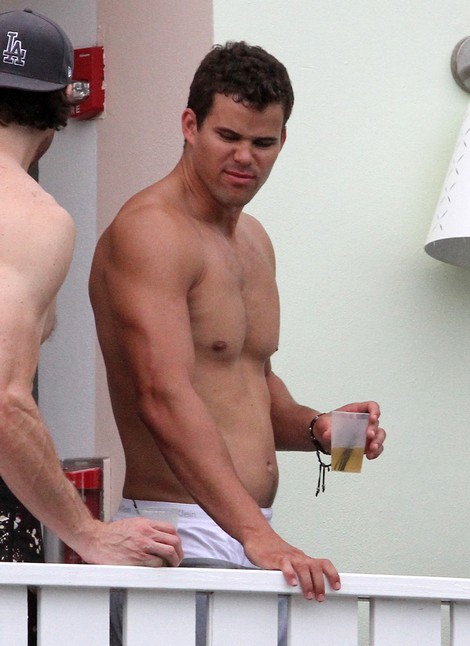 Celeb Dirty Laundry reported that Kris Humphries would be the “presumed father” of Kim Kardashian‘s new celebspawn, but that’s not the case. We are here correcting our story but other sites have not and more and more continue to latch onto this ridiculous notion.

California and 19 other states have adopted the “Uniform Parentage Act” which lays out certain rules for paternity, custody, support and visitation rights. The situation Kim, Kaye West and her soon to be ex-hubby find themselves in is less and less unusal these days. As marriage grows less popular and infidelity more so, there are increasing incidences of pregnancy during marriage that does not involved the hubby.

California law states: “a man is conclusively presumed to be the father of a child if he was married to and cohabitating with the child’s mother…” So for part one of the law – married to – Kris meets the criteria, but it’s part two where it falls apart – they are not cohabitating, have not been for some time and were clearly not at the time of conception.

Even if Kim wanted to try to force Kris to be her presumed baby-daddy, the law is on his side. All he has to do is say “no thanks” at any time after the birth of the child under these conditions “(1) the presumed father and the mother of the child neither cohabited nor engaged in sexual intercourse with each other during the probable time of conception; and (2) the presumed father never openly treated the child as his own.”

Kim and Kris clearly meet standard number one for him to fight back and as to standard number two, I can’t imagine that Kris would openly welcome the Kimye spawn as his own. And this would only come into play if Kim tried to demand that Kris accept parental responsibility of the child. That’s not likely to happen.

Kris has no reason to sweat any presumptions of fatherhood – even though they’re not legally separated, by the fact of their public split and lack of cohabitation and intimacy, there’s no threat of his having any legal rights to the Kimye offspring.

All that said – if Kris maintains his legal residence in Minnesota and Kim went up there to decide paternity, Kris would be the baby daddy until it was otherwise proved. Their laws are a little less liberal and modern than California’s and read: “If a woman is married and has a child by someone other than her husband, Minnesota law automatically presumes that her husband is the father and he will be legally responsible for the child until paternity is established with the other man. The biological father has no legal rights or financial obligations to the child, unless he is established to be the “legal” father.”

So, the only way that Kris will be involved in this baby sitch is if Kim packs off her ample bottom to Minnesota and tries to force him to claim her off-spring. As long as she stays in Cali, the baby is Kanye and Kim’s even if she and the b-baller are still married when she whelps! (Breathe a sigh of relief Kris – this is not and will never be your problem!)