Kim Kardashian Pregnancy Weight Gain: ‘How’d I Get Like this?’ She Shouts (VIDEO)

BY Nicholas Sanford on May 24, 2013 | Comments: 3 comments
Related : Hot Celebs, Hot News, Keeping Up With The Kardashians, Kim Kardashian 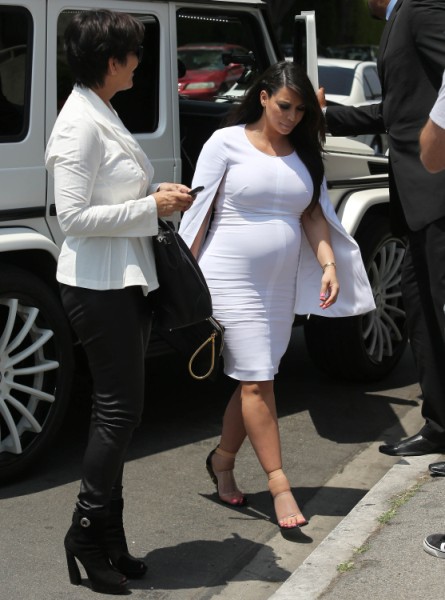 Kim Kardashian is definitely preggo, and the reality TV queen has been getting a lot of criticism as of late regarding the weight she’s gained while pregnant. Many celebrities, including her sister Khloe, have voiced their opinions on the matter, of course shouting their support of Kim for the entire world to hear. But in the newest trailer for the return of Keeping up with the Kardashians, Kim expresses her insecurities regarding her rapid weight gain. We think it’s the hormones talking. She needs to get that baby born, pronto.

In the clip, she yells, “How the f*** did I get like this?” She ranted while pointing at her belly and looking at herself in the mirror. Watch the clip below and check out the very first sequence; E! was very careful when composing this trailer. They clearly wanted that nugget of audio to be the think that grabbed everyone’s attention.

Here’s the thing about this whole thing: She’s pregnant. And, as far as I know, you are supposed to get big when you’re pregnant. I don’t know why everyone’s freaking out about it. She’ll give birth, rock that baby in her arms for a few seconds, get a 400 billion dollar contract with Weight Watchers, lose it all, and get back to her voluptuous Kardashian self.

Khloe wrote in an open letter defending her sister:  “I find it disturbing that society loves to critique a woman’s shape. I am a first-hand victim to public attacking in regards to my body. That is low in and of itself, but I cannot tolerate one more vicious attack on my sister! For anyone to ever criticize a woman who is growing another life inside of her is true scum.”

Also in the Kardashian klip: Kris Jenner making it know that nothing will ever tear apart her family. [Despite all the marriage trouble rumors surrounding her and Bruce]. Dang, E! really knows how to play off the gossip, don’t they. Well done. What do you think about this: Kim Kardashian weight gain?