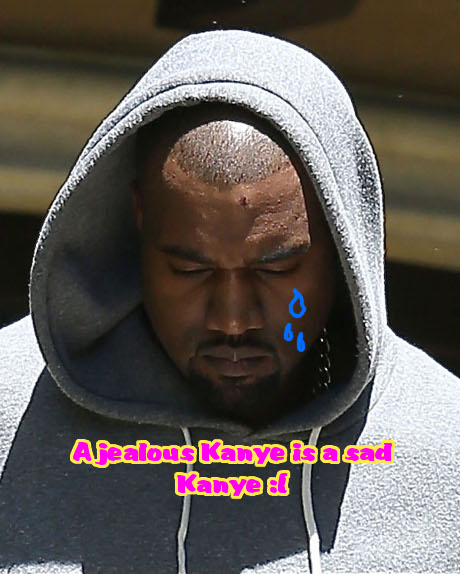 Reggie Bush’s daughter was recently born, and Kim Kardashian reportedly reached out to congratulate him on the birth. Now, it’s a sweet gesture and if it was anyone else, it wouldn’t raise any suspicion. But we all know Kim doesn’t do anything, especially something like this, without an ulterior motive. So was this some roundabout way for Kim Kardashian to try to get Kanye West’s attention? Is Kim actually trying to make Kanye jealous?

There have been plenty of reports stating that Kanye can’t stand to hear Reggie Bush’s name, especially in connection with his current girlfriend. Even though the situation here was perfectly innocent, I can’t help but imagine that Kim must have known that it would make Kanye mad if he found out about it.

When it was first announced, Radar Online reported, “Kim sent Reggie a congratulatory message and while Reggie wasn’t expecting it, he was very happy that she sent out her well wishes.”

Very happy? More like, he’s thanking god that he managed to get that woman out of his life before she gave birth to any of his children.

Is this something you could see Kim doing? Kanye’s the most high-profile relationship that Kim’s ever had, and she would never jeopardize that. But she’s also pregnant and hormonal, and she knows that Kanye has to put up with her right now. Maybe this is just retaliation for the amount of time he spends away from her.

Or maybe she’s just doing something nice and heartfelt, and she reached out to Reggie to offer her congratulations because she actually meant it.

Oh, who are we kidding, it’s Kim Kardashian. There’s no way that’s the case. Whether it was Kim’s team or Reggie’s team that leaked this, Kim knew that reaching out to Reggie would end up in the news. The only question is whether she was hoping it would make Kanye mad, or whether it would make Kanye REALLY mad.

Image credit to FameFlynet/modified by CDL