Kim Kardashian Says: Scott Disick Will Cheat on Kourtney Kardashian and It’ll Be Her Fault! (VIDEO) 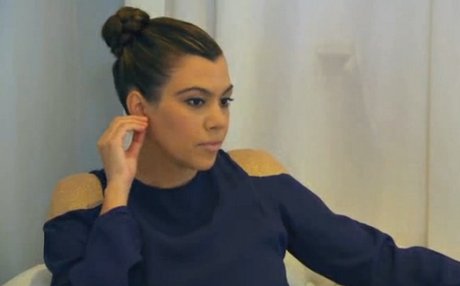 Kim Kardashian, in true Kardashian Klass (sarcasm), told her sister Kourtney Kardashian that Scott Disick will eventually cheat on her and “it’s going to be all her fault.” The conversation goes down on the upcoming Sunday episode of Kourtney and Kim Take Miami and Kim eventually arrives at this crude and awful statement after chatting with her sister about Scott.

Kourtney comes in with some super duper gold strappy shoe things wondering where Scott went because she’s looking to have lunch with him. Kim tells her sister that he took the boat out in an effort to find some alone time. That’s when Kim starts rambling on and on about how Kourtney only pays attention to her kids and is neglecting Scott. “Well, my kids are my first priority,” responds Kourtney.

As well they should be, right? Kim might want to take those words to heart because she’ll soon be faced with a similar dilemma. After all, she does have a baby on the way and, whether she realizes it or not, she’s going to have less alone time with her boo Kanye West.

Kim tells Kourtney: “He just feels like you only care about the kids,” eventually adding the painful statements, “you just don’t put in any effort. You’re going to lose him. No joke. You’re literally going to end up, like, alone.”

Every time I think I might be starting to cope with the ever-looming Kardashian presence in the Celeb World one of them comes along and says something like this. Kourtney says she enjoys doing things as one, big, happy family, but is now absolutely terrified that she’s losing the father of her children — thanks, Kim, you’re a gem.