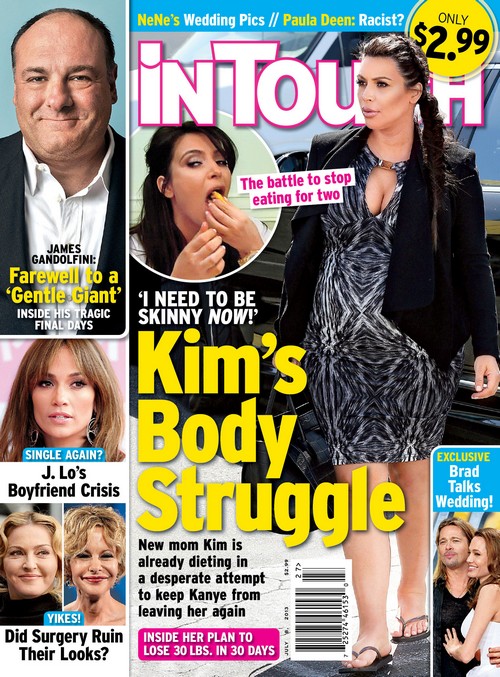 Reality star Kim Kardashian gave birth to her first child with rapper Kanye West on June 15, 2013. She was said to be five weeks early and their baby, named North West, barely weighed five pounds in total. All of the Kardashian famewhores were able to slip in and out of Cedars-Sinai Medical Center without being detected.

We were expecting some influx of baby photos or pictures of Kim after she left the hospital. For once in her life, Kim did something on the down-low. Unimaginable, right? We are truly shocked.

In Touch Weekly shows an inset photo on their cover of Kim shoveling food into her mouth because apparently she is having trouble stopping eating for two. We can imagine that she feels the need to lose the baby weight as quickly and healthfully as possible, but when is it okay to start picking on a woman who just gave birth to a baby less than two weeks ago?

We’re not defending Kim by any stretch of the imagination, but we are curious as to why “Kim’s Body Struggle” is making news for the tabloids. Anyone wanna take a guess with us in the comments?