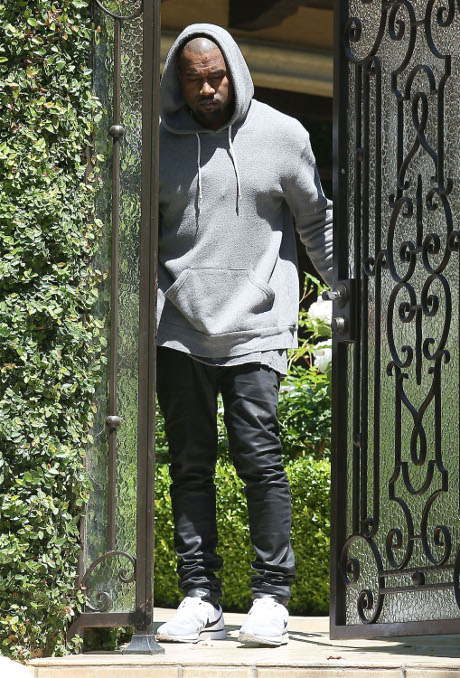 Last weekend was intended to be one of the happiest days of Kim Kardashian’s life. She was celebrating the upcoming arrival with those closest to her and no expense was spared to make the occasion a dream come true. Baby daddy Kanye West showed up as guests were leaving and then cut out before the festivities officially ended. Yes, Kanye is known to be an outspoken, self absorbed prick but according to the June 17th print edition of Life & Style magazine there was more to his miserable appearance than just those things.

While Kim still wants every single moment of her life documented by a film crew for her reality show, Kanye is having none of it. He knew that the shower was going to be filmed for the show and he absolutely refuses to willingly appear so he was trying to avoid being trapped in any of E!’s shooting schedule.

Rumor has it that Kanye is also pissed that Kim has completely gone against his wishes to at least keep their baby from being dragged into the spotlight. He has tried to convince her that some things deserve to be private but Kim doesn’t seem to grasp that. Earlier in the week it was revealed that Kanye has no intention of being in the delivery room. Of course that originally triggered a negative reaction because first he has been an absentee father-to-be and now he’s too selfish to support Kim through the delivery. However it seems there is a bit more to it than that.

Kim originally refused to have cameras in the delivery room but she has changed her mind. If she doesn’t keep the delivery a private moment then Kanye refuses to be filmed as his child is born so he will not be present. Apparently Kim has decided to profit from her daughters birth rather than make it a special moment between herself and Kanye.

I guess honoring her contract with her reality show is far more important than creating a real life and if that’s the case, I can’t actually blame Kanye for choosing to be MIA, can you? Tell us your thoughts in the comments below!