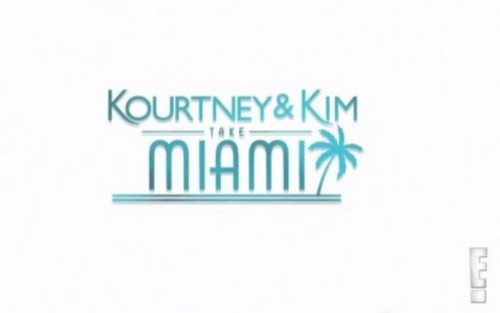 Tonight on E! KOURTNEY AND KIM TAKES MIAMI returns with a whole new episode called, “Miami VICEs.”  On tonight’s show Kim gets to work with a private detective, while Scott is forced to wear a new fashion accessory because of his eye problems. Elsewhere, Kourtney is desperate to get back in shape. Did you watch the last episode? We did and we recapped it for you!

On last week’s show Kourtney hoped a trip to Paris would put the spark back in her relationship with Scott, who seemed oblivious to her attempt to get romantic.  We wondered if Kourtney was in jeopardy of losing Scott?  According to Kim she might be. At the same time, Kim tried to patch up things between Simon and Jonathon, but the results were less than successful.

On tonight’s show Kim’s crime fighting fantasy is about to get real.  Also tonight Scott risks his life ;-) by telling Kourtney that she is fat and that she needs to lose weight.  Also Kim warns Kourtney that she has to start treating Scott like her husband and not her son.

Tonight’s episode is going to be another drama packed one, which you won’t want to miss. So be sure to tune in for our live coverage of E!’s Kourtney and Kim Take Miami Season 3 episode 8— tonight at 9PM EST!  While you wait for our recap, hit the comments and let us know how excited you are about the new episode of KKTM tonight and check out the sneak peek video below of tonight’s episode below!

Kim is told by the city manager that she is being given the keys to the city of Miami. She wants to know how soon she can do a ride along through Miami.

At home, Mason is working on a puzzle. Kourtney says it’s harder for her to lose the baby weight this time around. Scott says that he fell in love with Kourtney when she was super skinny. He remembers that she whipped herself back into shape after Mason’s birth and that she’d feel more comfortable if she got back to her previous weight.

Kim and Jonathan go on a ride along of their own. They see a guy climbing over a fence, trying to break and enter into a building. Kim says she is on a high.

Mason, Scott and Kourtney go to the beach. Scott wonders why Kourtney doesn’t wear bathing suits anymore and that she only wears grandma cover ups now. Scott gets something in his eye and they leave. Later that night, Scott is still complaining about his throbbing eye. Kim tries to give him an eye drop. Kourtney holds his head and Kim drops it into his eye.

As part of another ride along, Kim asks the cops to put the handcuffs on her. She asks one of the female officers if she’s ever been shot or shot someone. Km gets excited when there is a call about a shooting being reported. She thinks it’s a rush. Kim looks on as a guy is on the ground who is having a bad reaction to drugs. Kim says all the excitement has made her hungry. Kim has the officer take her through a drive though for a sundae and fries.

Scott is still complaining about his eye. Kourtney weighs herself. She is 115lbs. He wants to know how much she weighed when they met. She says 95lbs. He says 93lbs would be perfect. Kourtney says she has to do what’s best for her and can’t compare herself to supermodels. Scott says he is just giving Kourtney motivation to get back to the ideal weight she wants to be at.

Kim says she is obsessed with detective work. Larca says Kim should meet her friend Jake who is a detective. Jake agrees to let Kim tag along. Kim is excited because she gets to do some real detective work.

Jake comes over to Kim’s place with his team. Kim explains her interest in detective work. Jake shows Kim some spy toys. Jake asks Kim to help him out with a kidnapping case. Jake tells her about garbology which is going through someone’s trash. Jake and Kim arrive at Freddy’s house. Freddy doesn’t have any more information on his missing daughter. The girl may have run off with her boyfriend in an attempt for some stability.

Scott is wearing an eyepatch. He feels like people are staring or making fun of him. Kourtney thinks it’s weird to see Scott not have any confidence. She’s never seen him like this.

At home, Kris and Kourtney are working on the treadmill. Kourntey says she needs to lose 15lbs. Kim says at least Kourtney has an excuse for her weight. Kourtney is tired of Scott’s comments about her weight.

Kim is investigating Farrah, the missing girl, on social media. She thinks she may have found photos of the guy they are looking for. Kourney gets Scott a fashionable eyepattch.

Jake comes over to Kim’s place and says she did good. Jake says that the guy Kim found is 29 years old and possibly running a prostitution ring. He had told Farrah that if she ever left him, he’d kill her. Jake says they’re going to hit the streets tonight to try and look for her. Kim says she is scared, but she does not want to give up on this little girl and will come along.

Scott shows his eyepatch to his friends and explains how he got sand in his eye. Scott thinks everyone is going to be wearing eyepatches now.

Scott tells Kim that he was just trying to help Kourtney out. Kim finds Kourtney crying,  Kourtney says she’s been trying to do things the healthy way and doesn’t need people making fun of her. Scott says she is a beautiful girl but would look great thinner. Kourtney says she has reached her breaking point. Scott thought he was helping. Kourtey says at least he knows now that his comments bother her. Kourtney goes exercising at a gym.

Jake and Kim find a possible location where Farah’s 29 year old boyfriend may be. One of Jake’s team members says they found him and talked to him; that he pretended not to know what he was talking about. They are going to contact law enforcement because they have to go by police protocol because it will be too dangerous for Farrah.

Scott, Kourtney and Mason go swimming in their pool. She wears a bathing suit. Scott says he loves her and not her weight. He says in the future he will try not to make her feel bad.

Jake tells Kim that they will stay on the case but there’s nothing that they can do. Kim gives Freddy a call to give him a heads up about the situation.