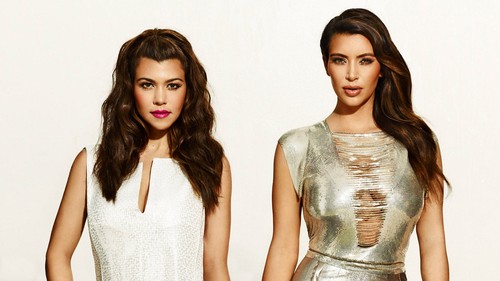 Tonight on E! Kourtney Kardashian and Kim Kardashian return with a new season of KOURTNEY AND KIM TAKE MIAMI.  Tonight’s show is the third season of the popular reality show and this year the sisters are in Miami.  Tonight’s premiere episode is called, “Back in Miami.”

If you watched last season of the Kardashian sisters taking Miami you know we can expect tons of drama and partying on the South Beach scene and we get to be with them every step of the way!  So make sure to come back at 9PM when we will be live recapping all the action of tonight’s premiere!

On tonight’s show Kourtney and Khloe, with Scott and Mason, return to Miami. The girls help get D-A-S-H back on track, and promote the store by doing a naked/painted photo shoot with two of their employees. At the photo shoot, Kourtney gets frustrated with hungover Khloé. After being late for her radio show, Khloé After Dark, she decides to get her priorities straight. Meanwhile, Scott looks into fixing up a nightclub.

Watch the sneak peek we have for you below. Tune in tonight, Sunday, January 20th at 9pm ET/PT, the first RECAP of our  two-night premiere of Kourtney and Kim Take Miami! Let us know in the comments section below if you’re ready to head on another Kardashian adventure. Or are you, after witness the finale of Keeping up with the Kardashians, ready to take a break from these non-stop reality television stars?

Recap: At the hotel, Mason is excited to see the beach. Kourtney and Kim are staying in Miami while Khloe flies back and forth to see her husband to work on their fertility. Kim has been with Kanye now for months and he cannot be there with her, but he has sent her a gift. Kim is still going through the divorce and it should be over and done with, but it’s not that easy. The judge promised that they would be divorced in 2013. Humphries wants Kim to admit she married him for press, but Khloe said if that were the case wouldn’t Kim have chosen someone famous.

Kourtney is overwhelmed and Khloe thinks Scott should be there but Kourtney is adamant that she doesn’t want him there.

Kourtney and Khloe take a walk and she explains how when Scott is in a busy city he is a part animal and will be out till 5am instead of wanting to be with her and the kids.

Kim got her present from Kanye, it is a fluffy baby Persian kitten. Kourtney thinks that by the time the cat has to go to the bathroom, she will be so over the kitten. Kim calls Kanye to say thank you and he names the cat Mercy.

Kourtney is taking her kids with her to Dash and Kim takes her new baby with her as well, meow.

At the Dash store, Khloe is upset because there are clothes strewn around, the backroom is a fire hazard. The sisters are really upset and Kourtney wants to fire everyone and move on. Kim on the other hand wants them to fix the problem. Kim’s phone rings, it’s her divorce attorney.

Later, Kim takes her new baby kitten out for a walk and it’s not having it. Mercy is not trained to go in it’s litter box and Kim had no idea, she thought they came trained (is she kidding?).

Kim goes behind Kourtney’s back and calls Scott trying to convince him to fly to Miami so that he can help out Kourtney.

Kim walks in and finds Khloe talking about her divorce and Kim is annoyed, she doesn’t understand why Khloe so interested in her divorce anyway.

Scott has landed and he is a little anxious to be there and afraid for when Kourtney sees him but he really misses her and the kids. Kourtney is offended and annoyed, she is worried that he is going to go out every night and she just wants him to be with her and the kids. Kim is on the treadmill and Kourtney goes to talk to her and wants to know why she went behind her back and invited Scott to be there – Kim was only trying to help because she knew that Kourtney needed the help.

Jonathan is also in Miami and Khloe shares a drink with him and starts talking about Kim’s divorce again. Later in the day, Jonathan calls Kim to chat and the conversation turns to her divorce and she is further annoyed.

The girls are back at the Dash store and a little happy that some of the necessary improvements have been made. Kim takes Kourtney aside and tells that she is annoyed that she keeps talking to everyone about her divorce. Khloe tells her that she doesn’t think it is healthy that she is keeping it in. Back at the hotel, Khloe wants Kim to release her aggression by taking plates and smashing them on the balcony and is silly as it may seem, it felt good.

Roya has arrived at the hotel, she is the Dash director and she has brought alcohol for their girls night. Meanwhile, Scott is not in the mood, he wants them to take their party somewhere else. The girls go elsewhere but are soon back and Kourtney and Kim want Scott to drive them out at 1:40 am for pizza and the two are drunk. The girls are acting like two school girls who got drunk at prom and Scott is not impressed.

Kourtney approaches Scott and wants to know why he is coming in at 2:00 am. He tells her that he did nothing but drive her sisters that were drunk and she is pissed at him. Kim can’t remember the night before and doesn’t know what happened to Mercy, who by the way they brought clubbing with them. Kim is just beside herself, she can’t find the kitten and doesn’t know what she will tell Kanye if she lost him. Kim looks at her pictures on her phone and finds that there are a lot with Jonathan and Mercy, it turns out that he has Mercy and she is fine.

Back at the Dash store, the sisters are realizing that they just need a new location, the store is too small for their inventory. Later at the beach, Khloe tells Kourtney that she has to believe in Scott more and change her mentality which will inevitably help him.

Kim has Mercy back and she is so happy, but Kourtney is right, she has to start taking this more serious. Kourtney can’t wait for Kim to have a baby and see what it is really like.

It’s been a week since Scott is in Miami and Kourtney admits that he has been amazing because he hasn’t gone back to his old ways. In fact, Kourtney has a surprise for him. Kourtney knows how much Scott’s convertible means to him. so she had it shipped to Miami for him.