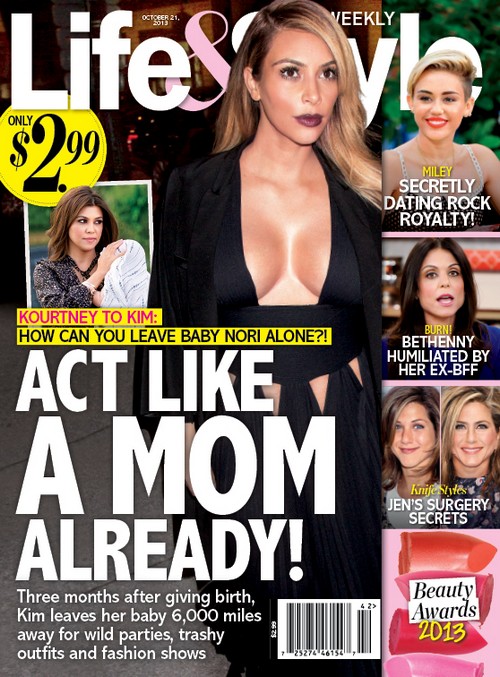 The current issue of Life & Style features the cover story, “Kourtney & Kim – Act Like A Mom Already.”  The magazine suggests that there is a new Kardashian feud brewing.  Kim Kardashian recently left her 15-week-old daughter North to go gallivanting around Paris partying with her baby’s father Kanye West.  Kim had the time of her life, with not thought of poor Nori….

When Kim up and left Kourtney was in shock, she could not understand how a new mother would abandon her child.  Kourtney felt that her big sister, Kim left Nori too soon after the birth.  An insider tells Life & Style, “When Kourtney’s kids were babies, she refused to leave them for anything longer than a couple of hours.”

Kourtney has said that when she is away from her children Mason and Penelope it does not feel natural, she misses them and she feels guilty.  She told the magazine, “I don’t want to judge, but I’ve met women who think it’s cool to be out or away from their baby, and I don’t get that.”

Kourtney is starting to think that Kim is putting Kanye before her daughter, and she is having a hard time staying quiet.  She is also starting to realize that is what is important to Kim is how she looks and her image and not North.  Kourtney does not like it one bit, she is furious.  The whole situation is a tinder box and it is ready to explode.

To find out more about the explosive situation between Kim and Kourtney, pick up the current issue of L & S on stands right now!