Kourtney Kardashian Reveals Her Diet Secrets – How She Lost 44 Pounds 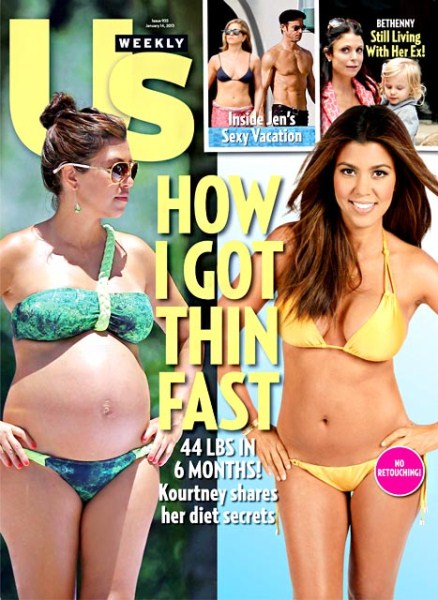 It’s been a few months since Kourtney Kardashian gave birth to baby Penelope and so you and I both knew that a big weight loss reveal had to be coming, right?  Apparently Kourtney has experienced the same thing that a lot of other moms have after having their second child- the weight doesn’t exactly fall right off any more!  The Keeping Up With the Kardashian’s star had baby Mason back in 2009 and she found herself back in tip top shape after about 3 months. This time it has taken longer and she’s also not pushing herself quite as hard.

Kourtney graces the latest issue of US Weekly to show off her new bikini body but admits things are different this time. “It was harder the second time around . This time, the focus is really on being a mom and being present, knowing my priorities.” I think it’s a good thing that she’s clear on priorities because her baby daddy, Scott Disick is never too much help. Kourtney seems to function pretty much as a single mom so she needs to keep her energy up but really can’t afford to be to obsessed with her body. She really does have more important things, like two little ones to take care of!

Speaking of babies, Bethenny Frankel is also on the cover of the new issue. She and husband, Jason Hoppy just announced their separation a few days before Christmas. Things have been rumored to be bad between this couple since at least last speing. They’ve always been complete opposites and well, opposites attract, until they just don’t any more. Then opposites can’t stand each other and that is said to be the case with these two. But why then is Bethenny still living with Jason? You’ll have to pick up the latest US Weekly to find out!