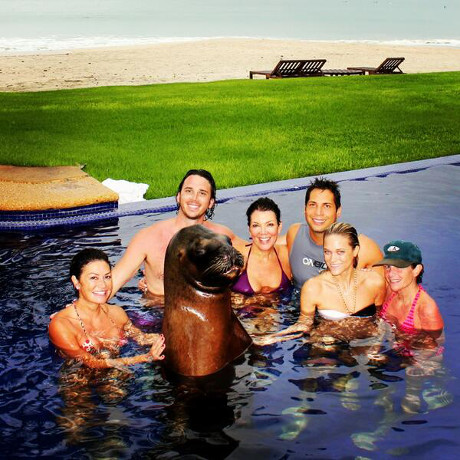 Kris Jenner has made no effort whatsoever to hide her relationship (or, what they’re calling a “friendship”) with Ben Flajnik, former reality TV star. She’s been seen whisking her new boy-candy to plenty of VIP concerts, fancy dinner date-nights, and even extravagant exotic vacations where you can play with sea lions! OMG, where can we sign up? Apparently, in early September, Kris shoved Ben in her suitcase and took him on a special vacation to Joe Francis’ mansion in Mexico.

The Girls Gone Wild founder’s pool came complete with a real sea lion. Yes, it just plays in the pool that guests swim in. Um, gross. The picture, featuring Kris and her hunk, was posted on Abbey Wilson’s Twitter. The photo was posted back in September, and I suppose now people are just finding the photo relevant. Abbey is Joe’s girlfriend.

In the photo, posted above, you can see the sea lion, who’s just floating there thinking to himself, “Wow, and these human celebs consider themselves higher than I.” Supposedly, Joe rents the sea lion from a nearby water park once a week for his girlfriend to play with.

Whether this is true love or not, Ben and Kris are definitely *some sort of* thing. Nothing’s official, and I suppose both of them prefer it that way. Kris gets the fake attention of her little boy toy and Ben gets all the benefits of dating a mega-rich celeb who, somehow, manages to dominate every aspect of the industry alongside her always-expanding famewhore brood.

What are your thoughts . . . . Kris Jenner/Ben Flajnik dating: YES or EWgrossNO!