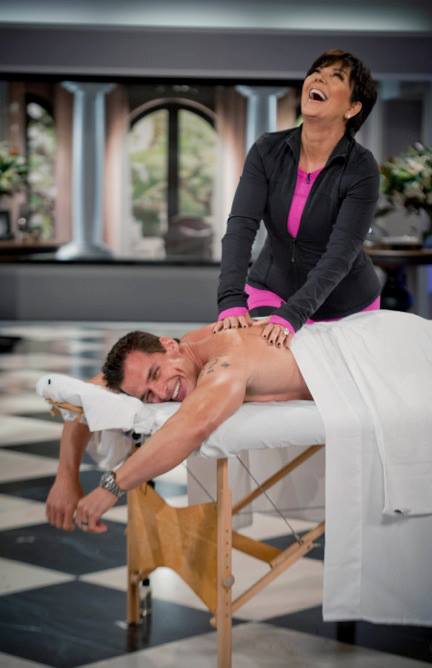 The more I learn about Kris Jenner the more I see her as the equivalent to a dirty old man. We told you the other day about Kris getting plastered and trying to dirty dance with Kanye West right in front of her daughter, Kim Kardashian. Once again Kris has found away to prove that any guy is fair game no matter what the familial association may be. If you tuned into Keeping Up With the Kardashians last night then you the creepiness that I’m talking about.

The whole Kardashian klan was vacationing in Greece and after she tried to cut Brody Jenner out of the fun, Kris eventually bought Bruce Jenner’s son a ticket. There clearly is no love lost between Brody and Kris and he hasn’t tried to hide it. Kris pretends that she has been absolutely fabulous to her step son but the truth is pretty obvious. As the reality cameras rolled, Kris tried to prove that she loves Brody by slathering sunscreen all over him. That would be fine if he wasn’t a grown man but since he is, it was just another man that Kris was pawing at other than her husband! Even Khloe Kardashian called Kris on her gross and totally inappropriate behavior!

Let’s think about this for a minute, if Kris puts her hands on Brody on camera and grinds on Kanye in front of the family then what the hell does she do with random men when alone? No wonder Bruce moved out of the mansion and left Kris! Can you imagine what he has witnessed? It had to be disgusting to watch his wife getting touchy-feely with his son and that right there tells you the kind of woman that Kris is.

How desperate do you think that Kris really is to get her hands on a young guy? Do you think she realizes just how much she has embarrassed her family? Tell us your thoughts in the comments below!