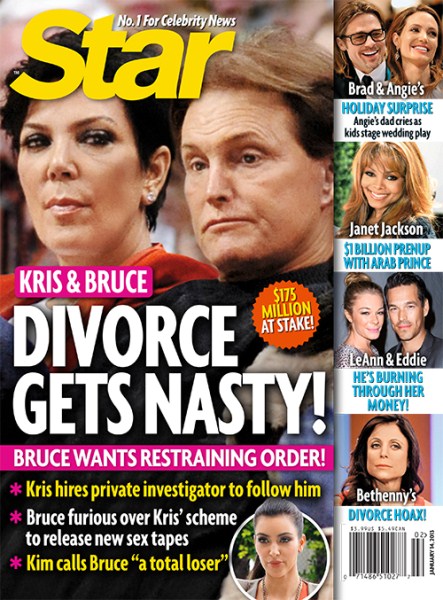 Just as Kim Kardashian is basking in pregnancy joy it looks like her momager, Kris Jenner is headed for one hell of an ugly divorce!  Poor Bruce Jenner has chosen to stay shackled to the bag of botox for several years past the marriages actual expiration and if you watched the most recent season of Keeping Up With the Kardashian’s then you know I’m not exaggerating in the least. This couple may have once really loved each other but those days are long gone. Bruce once purposely went MIA to see how long it would take Kris to notice and it was days before she so much as called him! Think I’m kidding? It was documented on their show!

According to the latest Star Magazine things have gotten really ugly. Bruce wants out, understandably, but Kris is threatening to divulge all of his secrets if he files for divorce. Seriously folks, how many deep, dark secrets can this guy really have? We already know all about his plastic surgery horrors, what more can their be?

One of the thorns in Bruce’s side is the way that Kris exploits all of her children in order to make a fistful of cash. There is no family privacy and everything- good and bad is best if captured by a film crew. Or at least that’s how Kris sees it. Bruce fears that Kris will encourage one of their teen daughters to film a sex tape and then profit from it. Think that fear is far fetched?  Think again. Kris is rumored to have been behind Kim Kardashians’ golden shower video with the artist formerly known as Ray J.  Bruce is said to be threatening to file for a restraining order before he’ll allow Kris to further currupt his daughters!

How long before Bruce files for divorce? I’m guessing it’ll be this spring! Tell us your thoughts in the comments below!