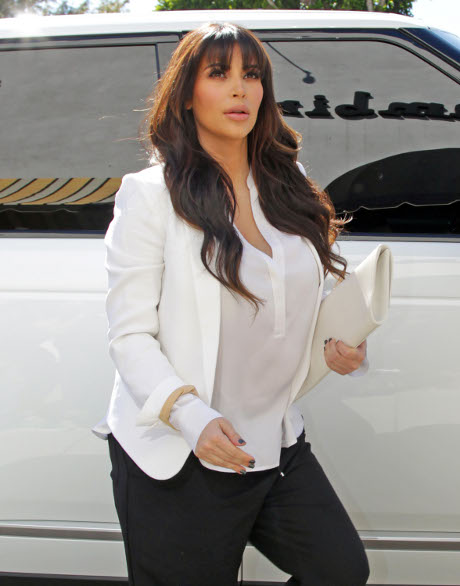 Does Kris Jenner think that expecting mom Kim Kardashian should get back to work as soon as she has her lil’ Kardashian baby nugget? According to the National Enquirer, Kris Jenner is experiencing some major stress as she finally realizes that the Kardashian’s biggest moneymaker is going to require some downtime after the birth. Now, I find it a bit hard to believe that Kris Jenner, while an uber intense business woman at heart, would allegedly act this way — but who knows. There have been crazier stories.

“A family feud’s erupted between expectant mom Kim Kardashian and mom-ager Kris Jenner,” claims the magazine, and the Momager “doesn’t want to let a little thing like motherhood put the family’s biggest cash cow out to pasture!”

The magazine reports that since Kourtney Kardashian already has two little bouncing children that she’d be more that happy to take some of the load off Kim’s feet — all so Kim can get back to work! Kim was supposedly furious at her mother’s plan and “couldn’t decide which was more insulting — her mother questioning her parental abilities or making it crystal clear that she’s simply an ATM for the whole family.”

I find this story a bit hard to believe. This seems like a low “too-low” even for Kris Kardashian. I know she’s all about her money, her brand, and her daughters’ success, but she’s also a mother and I think people forget that sometimes. This isn’t just a random baby, it’s also going to be her grandchild, and I’m sure Kris J want’s nothing but the best for this newest Kardashian addition. After all, they will make a wonderful new reality show in the future, Kris. Just keep your eye on the prize!

What do you think about Kris Jenner’s alleged proposal? Real or fake? Let us know in the comments below.