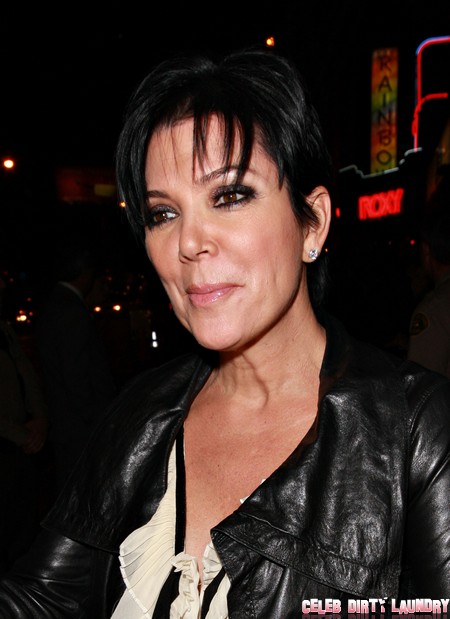 In less-surprising news, Kim Kardashian’s momager Kris Jenner has already figured out how to profit from her daughter’s pregnancy: she’s turning it into hit reality TV! For the family who can’t buy milk without making the front page, it’s no shock—just another disgusting sell out move to add to the list! Last night, Kanye West announced Kim’s pregnancy to 20,000 of his fans during a concert, but Team Kim is trying to act like that was the plan all along.

“Kim is absolutely over the moon,” a source reported to Hollywood Life. “The family was not allowed to say anything to anyone not even to the extended family about Kim’s pregnancy, until Kanye made the official announcement on stage. Everyone is pretty shocked.” Right. I’m so sure that of all the ways that pregnancy could have been announced, Kanye giving a shout out to his baby mama was the option they picked! But in classic Kardashian style, when life gives you a Kanye blunder, make lemonade!

Kris is no stranger to selling out her kids, and Kim’s first pregnancy is no exception. We’re glad Kourtney Kardashian has Scott Disick’s shoulder to cry on (assuming he isn’t ditching her and the kids for a party), since it’s pretty obvious that Kris didn’t think her two pregnancies had any cable value! “Probably the most excited person is Kris. She let us all know that this will be the theme for a new reality show, the best Kardashian show ever. They are going to document everything about Kim’s pregnancy, but I don’t know how Kanye feels about that.” Considering that Kanye just said he’d trade Kim for a Grammy, he’s probably pretty bummed to be permanently attached to the Kardashian brand!

Kim is now on the war front: Kourtney, despite wanting “Mason to have cousins his age,” will most likely feel really hurt that her pregnancies weren’t as news worthy. And Khloe Kardashian, who is on the verge of a nasty split from playboy husband Lamar Odom, is reportedly suicidal over the news. She hasn’t kept her fertility woes secret, and even sought professional help on last season’s Keeping Up With The Kardashians. Now she’s surrounded by babies, while her life crumbles. Do you think Kim’s pregnancy docudrama will be a hit, or is her time in the sun ending? Will motherhood tame her?