Kris Jenner Reacts To Kim Kardashian’s Pregnancy, Then Orders Her Back To Work 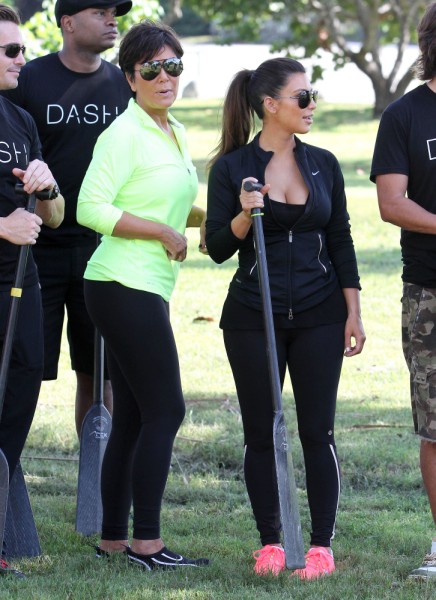 Everyone and their mom has an opinion on Kim Kardashian’s pregnancy news with boyfriend Kanye West. It doesn’t really matter that she’s still technically married to Kris Humphries because baby’s are blessings! Ask Angelina Jolie, they wipe any reputation clean. So we shouldn’t forget momanager Kris Jenner. She took to her twitter to send all her excitement into the world.

But there’s no rest for the wicked, Kimberly. No putting your feet up any time soon. Your mom booked you for New Years! According to TMZ, Kim is still expected to host a New Year’s Eve bash in Las Vegas tonight. It’s sweet that Kim’s taking her fetus to show it where it will probably dance on tables one day. Just kidding (not really)! Kim’s reportedly getting paid $300,000 for the appearance and she’s only around 12 weeks pregnant so it’s not really a big deal. You didn’t think being pregnant was going to stop Kim for making her money, did you?

But this is an interesting topic. If Kim marries Kanye then those two are going to combine some big time fortunes. With money like that, Kim won’t need to reality famewhore herself around town anymore. But her family needs her. Kris needs her! Would the Kardashian brand take a hit if Kanye refused Kim to participate in the show? I think so. Kris might be trying to pimp out those young ones at the expense of her marriage but they aren’t Kim. I don’t even like Kim on the show that much but she’s a great pathetic wall for Khloe and Kourtney to bounce their annoyances against. Are the Kardashians over with this baby?

Did Kris Jenner react the way you thought she would? She might be excited now but do you think she’ll have issues if Kanye drags Kim away from the reality life that made them all stars?