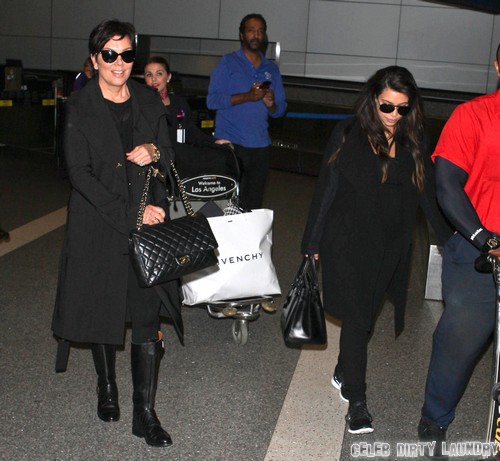 When it was revealed that Kim Kardashian had gotten pregnant by Kanye West, Kris Jenner was probably frothing at the mouth. Couldn’t she just imagine all of the opportunities and money to be made as a result of having another Kardashian in the family? So it only makes sense that she’s been crunching the numbers to see how much of a profit will be made if those crazy kids sell their first baby’s pictures to the media.

A source said, “That was for now. Things can change.”

Kim has already said that Kanye is a bit of a private person, so he didn’t want their baby out in the media spotlight. We all know that there is a certain amount of public interest — coupled with the fact that this broad would sell out her own mother for a nickel. So, why not her own baby?

We’re guessing that she will sell some of the photos and make a tidy profit. Afterward, she’ll say that they demand their privacy and deny that she made any profit whatsoever. It’s the Kardashian way.

What do you think? Will someone end up selling off the pictures to the highest bidder? Hit the comments and let us know your thoughts!