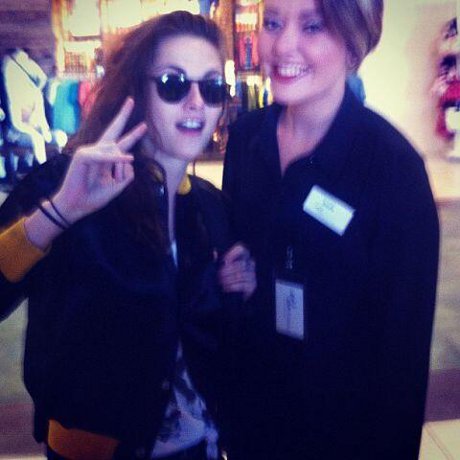 Kristen Stewart might have garnered a bad rep for herself after flipping the celeb world the bird, but in a recent picture with a fan K-stew decided to put away that frown of hers and brighten up the Twittersphere with a glowing smile and pair of peace fingers. Now, I think it’s fair to say that Kristen has a lot of emotional stress on her plate right now and, while her Robert Pattinson dilemma certainly isn’t an excuse for her recent behavior, I think it’s safe to say issues of love are turning her into a madwoman.

What do you think about Kristen Stewart smiling away and doing some damage control with a bit of peace action? One thing Kristen is good about doing is posing with her fans — regardless of the current emotional state she’s in. While Kristen does receive a whole bunch of crap from the celeb world, and especially the people who comment on the celeb world, I have a feeling she’s a pretty down-to-earth person and would be fairly approachable to her Twihards. What do you think?

Now back to the Kristen Stewart/Robert Pattinson split. Do you think the stars will ever align again and bring back together this over-hyped couple that everyone simply couldn’t get enough of? Who knows. If Katy Perry has her say, I have a feeling that relationship is as good as gone, but there are loads of people — Kristen Stewart included (I think) — that wish to see that love rekindled. Do you think it’s in their futures? Let us know in the comments section below. I love hearing from Twihards, so speak away, fellow vamp-lovers — or forever hold your sparkly opinions to yourself.