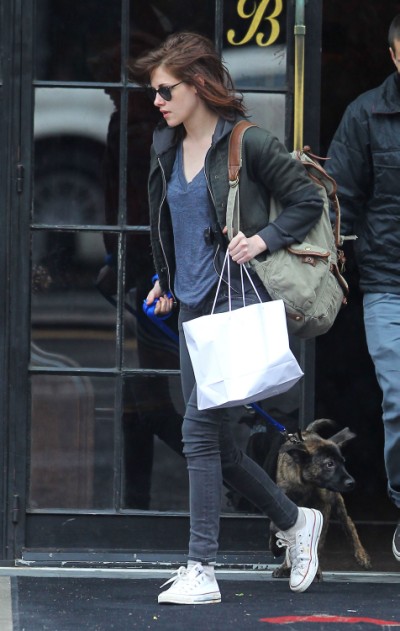 There are some stories I should just read and laugh at and brush aside. I do this to most. But this one involves puppies and I can’t help myself. I get sucked in every time. Damn you Daily Star!

Kristen Stewart and Robert Pattinson are reportedly at war because Kristen’s pissed Robert scored their dogs in the divorce. She’s so annoyed by his asshole move that she’s considering legal advice. Kristen Stewart can’t be all that bad if she loves her animals that much, can she? I think I just found a reason to be Team Kristen in this whole break up. Oh, who am I kidding? I was always Team Kristen!

“Kristen thinks they should have one each,” an insider told the Daily Star. “She’s missing the dogs like mad, but doesn’t want the situation to turn nasty.”

Listen, I know this story is about as real as Tom Cruise’s marriages but it breaks my heart anyway. My husband and I never talk about divorce but we have discussed who gets the dogs and it sure as shit isn’t him. Just like if you are going to raise your kids with religion or ever allow your in-laws to move in with you, these conversations need to be had and they need to be had early. You can’t wait for the break up because then it just gets nasty. Can you image Bear and Bernie’s (Kristen and Rob’s dogs) faces as they pulled away in the truck? They can sense it’s the end. You know they can. Or were they happy? All you Kristen haters out there probably think they wagged their tales in delight to be away from the crusty bitch for good. She really can’t win even in a make-believe dog custody story. I bet Katy Perry LOVES dogs.

Below are pics of Kristen walking Bear in 2011. Sidenote: I couldn’t find any pics of Rob walking the dogs….