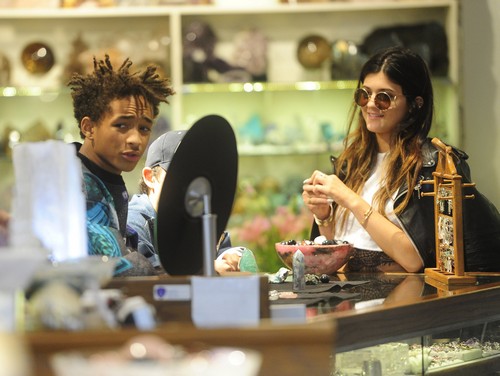 Well, look at that. Drama in the spoiled reality star/spoiled pop star/spoiled movie star dimension of reality. According to a recent interview of Kylie Jenner‘s, she might be crushing on her boyfriend‘s best friend. Will Jaden Smith be happy to know that Kylie has a teeny crush on Justin Bieber, or will he laugh it off?

Well, Kylie obviously denies dating Jaden at all, claiming that he’s just her ‘friend’. Yeah, right, as if anyone’s buying that. Anyway, Kylie was at the premiere of Justin Bieber’s ‘Believe’, and she admitted to reporters that she found Justin ‘adorable’. When asked if she thought Justin was cute, she replied, “Of course! Doesn’t every girl think he’s cute?” Um, NO, most certainly not. In fact, I think almost ‘every girl’ outside of the age range of 12-18 does NOT think Justin Bieber is cute, but rather annoying.

But later, maybe conscious of starting rumors or speculation, she also added, “He’s always been so nice and he’s such a good guy despite what everyone says about him. I think he’s amazing.” She also claims Justin is ‘humble’, so I can’t tell if she’s smoking crack or just delusional. If she is crazy, then she and Justin would be perfect together.

Anyway, whether Kylie admits or not, I think we all know there’s something going on between her and Jaden. So I doubt Jaden would be too happy to know that his rumored girlfriend thinks that his best friend is adorable and cute, especially when that best friend is richer and more famous than him. Granted, Jaden’s way saner, but when does that stop people in Hollywood?