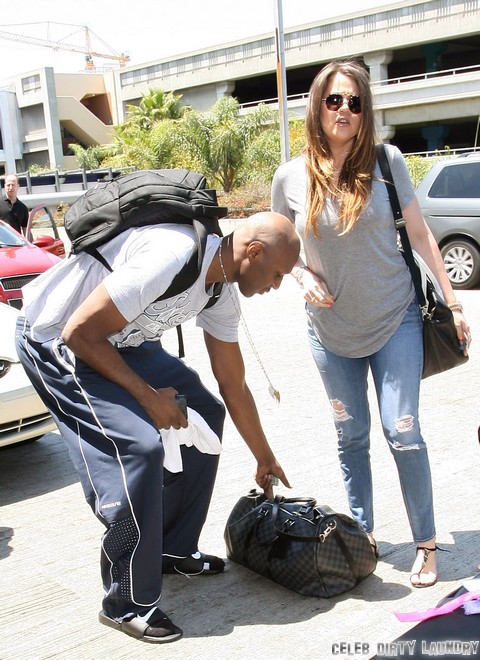 Watching the dissolving romance between Lamar Odom and Khloe Kardashian recalls high school days in AP Psychology, especially when the couple get in Twitter frenzies about how in love they are—and though I didn’t end up a psych major, I’m pretty sure the condition is universally called denial. In the past six weeks, dozens of inside sources have shouted their marriage problems from the rooftops—and for you who don’t trust tabloid reports, have faith, cause we’ve got pictures of his many indiscretions! Lamar was spotted partying with other women in nightclubs across America. He took of his wedding ring, has been notoriously missing from many big Kardashian events, and looks emotionally distant and cold in paparazzi pictures.

So when Khloe started spamming Twitter with promises of true love and personal strength, I raised my left eyebrow—just a little. I mean, surely she can’t have come up with a non-adulterous excuse for his clubbing habits? Spouses can forget to wear wedding bands—you leave it next to the sink after washing dishes, or in a jewelry box after a workout. Whatever. But photos don’t lie! So how could we trust in Khloe! Whatever the truth may be, she’s gotten Lamar to go public about their strong marriage!

This morning, Lamar tweeted, “This is OUR love. If you don’t understand it . . . well, we never asked you to. We rock together. Forever.” First, can anyone confirm if those are song lyrics? Khloe retweeted with the response, “Love you baby.” They’re a united front, and they’re Twitter official! It’s an interesting idea. Maybe they both want to be in an unhealthy, unhappy, fake, plastered-on-smile marriage. It could very well be that when they compared dream spouse lists, they found a mutual desire for occasional affairs sprinkled with emotional abuse and (on Khloe’s part) a life of slavery.

Sorry, Lamar, but doesn’t agreeing to a reality show fundamentally invite and ask others to participate in your relationship? You gave us a window to look through—don’t get pissed when what we see doesn’t add up! I don’t understand your love, and I bet I never will! Is divorce on their horizon, or will they continue on this path of staged happiness?