Lamar Odom Reveals Kardashian Family Dirty Secrets: Who Kris Jenner Slept With and How Kim Really Made Her Money (Photo) 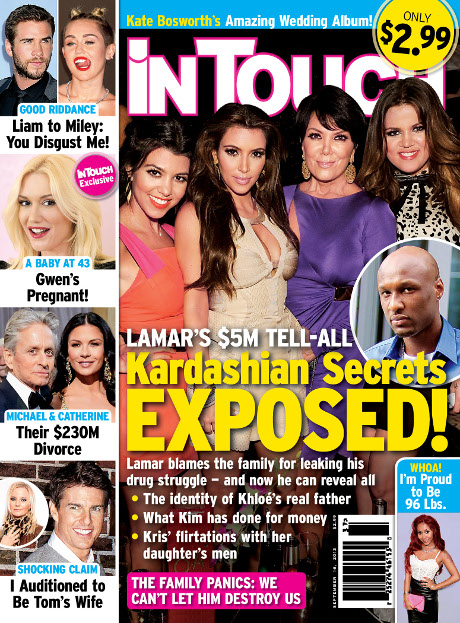 About ten days after the Kardashian family allegedly began leaking the details of Lamar Odom‘s drug abuse to the press, the embattled NBA star is ready to swing back in the most public of ways. Apparently, Kris Jenner had a couple cocktails too many before releasing dirty details to the media because she forgot about the glass mansion that her entire family lives in. No one has more to hide then the Kardashian klan and Lamar has decided that if they insist on taking him down he’s going to bring them with him.

According to the Sept. 16th print edition of In Touch Lamar has been embedded in the family just long enough to have stockpiled the goods on things like who his wife’s real father is. He also has watched Kris get drunk and act inappropriate on many occasions and it seems that her daughters’ men are never really off limits!

Then there’s Kim Kardashian. She has made a sex tape for cold hard cash but apparently she has done a lot more than that to line her bank account and Lamar has no problem airing her dirty laundry too. But the worst is that Lamar is ready to reveal Khloe’s real father… and it isn’t Robert Kardashian!

Can you believe that Michael Douglas and Catherine Zeta-Jones seem to be on the fast track for divorce? Did you see that coming? Those close to the couple say that it’s about to get really ugly and custody will be the sticking point in court. What did Liam Hemsworth think of ex-girlfriend Miley Cyrus’ VMA show? Well, he was as offended as the rest of us! You’ll have to grab In Touch to find out more, but in the meantime do you think Lamar will talk on the record and spill family secrets? Tell us your thoughts in the comments below!