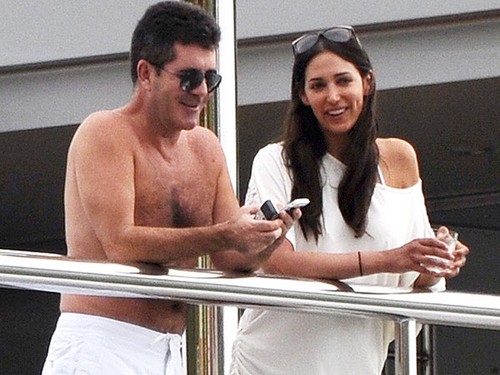 Lauren Silverman is just an ungrateful fame hungry socialite.  She pulled a Kim Kardashian and got pregnant by Simon Cowell while still being married to the father of her 7 year old child, Andrew Silverman.  The swinging millionaires are trashing each other over sole custody of the kid, and Simon’s old crusty tail is quieter than the audience after Kanye West snatched Taylor’s Swift’s microphone.  No, Simon Cowell is more mute than Camilla Parker-Bowles at the Compton Swapmeat.  Simon may be rich, but he’s in his mid 50’s, and the world cannot produce enough Geritol to give him the strength to care for a newborn.

But this gets even better – allegedly, Lauren’s own stepfather said that she is a star fucker!

Stewart Eisenberg (Lauren Silverman’s stepfather) told MailOnline Lauren slept with Cowell because she was lonely and you ‘can’t put a credit card under your arm when you go out to dinner’.

He knew Lauren had star f***ing tendancies – not literally – and that she enjoyed being around celebrities, but he had no real clue.’

Lauren claims her husband knew her and Cowell were bumping uglys on a regular basis, but she also admits she knew Andrew Silverman was sleeping around on her.

Is this the price of being about ‘that life’?  Silverman is out of touch with the world’s reality.  People are starving, unemployed, and scarfing air sandwiches for breakfast. We can’t afford gas, we can’t afford food, we cannot afford to pay attention.  It’s a weak economy… to most bottom-shelf peons. “Poor” Lauren just grew tired of watching the Housewives and other reality star divas flaunt their wealth in the face of the foreclosed.  She wasn’t missing a confidant to snuggle with, this unappreciative floozy needed a platform to brand herself.  Somebody give this nutcracker a book deal so she can write a How-To.