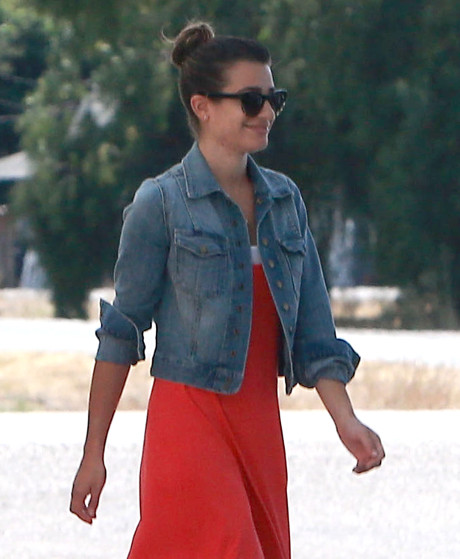 When the devastating news that Cory Monteith had died hit the world, there were some insidious rumors that stated that Cory was dealing with a breakup with longtime girlfriend Lea Michele and that’s why he had gone back to drugs. However, his reps and everyone close to him soon shut down those rumors, and Lea and everyone close to Cory continued to mourn his loss.

However, there are unsubstantiated reports that state that Cory and Lea were actually just a PR showmance, and that Lea’s already moved on from her supposedly heartbreaking loss to be with another man. Several ‘sources‘ claimed to have seen Lea at a luxury resort in California with a man, approximately 10 years her senior. Sources claim it was definitely not a family member or anybody on her team, and they also claim that Lea and this man were sharing a room.

Now, considering that Lea is supposed to be recovering from her devastating loss, these sources are drawing conclusions and claiming that Lea and Cory were never together to begin with. My question is – regardless of whether they were friends or partners, wouldn’t it be painful for her either way? Sure, losing a loved one is hard if they were your significant other, but losing a friend can be just as painful. If Lea truly was moving onto another romance so quickly, it does bring into question the validity of her relationship with Cory, no doubt. But if this is her method of coping after such a major loss, then so be it.

What do you guys think? Were Cory and Lea in a showmance, or is she just coping and dealing with it in her own manner? Let us know your thoughts in the comments.