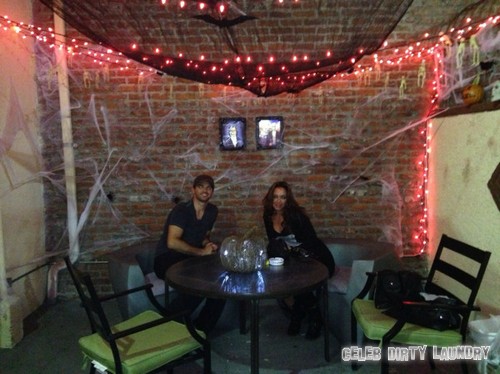 Leah Remini danced a Rumba, on tonight’s “Hollywood Night” episode of Dancing with the Stars.  Check out Leah’s DWTS bio right here. If you missed tonight’s show you can read a full and detailed recap, right here.

On last week’s show Leah was given a 24/30 for her Samba routine.  Carrie Ann had this to say about her Samba:  “You unleashed your samba goddess honey!”  If you missed any of last week’s performances, you can check out all the videos, right HERE.

Leah Remini and professional dancer Tony Dovolani danced a Rumba.  Leah did not say much about her dance this week but Tony tweeted the following with the pic above, “My partner @leahremini is the best. She decorated the studio for Halloween. No one’s done that before! #TeamLeony“

Judges comments:  Len said, “I love the chemistry, the interplay was terrific.  Occasionally I would like to see more fluidity.  Very good.”  Bruno said, “You definitely got the part, you seductress.  OMG you were giving me sexy face.  It so good when I see people growing.  I loved it.”  Carrie Ann said:  “I thought you arm was extending.  I think you had a problem on the double shenae.  You have turned the steam up to full steam ahead.”

Watch the video below and let us know what you think? Do you think Leah did enough to avoid elimination next week? Sound out in the comments below!