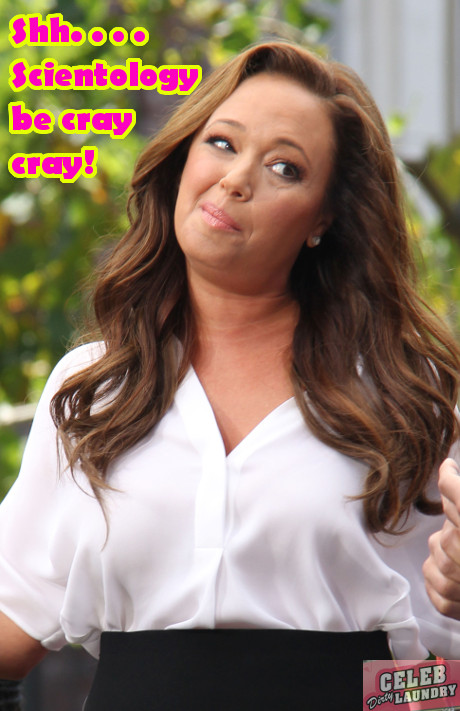 Leah Remini, who was once a member of the infamous Church of Scientology, is doing all she can to put the institution that wronged her in a bad light — and she just might be doing a great job. The actress’s most recent attack on the church includes a missing person’s report filed with the LAPD regarding the longtime unseen wife of David Miscavige, the leader of the Scientology.

A spokesperson for the LAPD told Radar Online, “Our missing persons unit informed us that Leah Remini did file a missing person’s report on a Shelly Miscavige. That is all we are going to say at this time.”

Leah left the church last month after catching wind of odd behaviors within and amongst the executive circles of Scientology, though the final straw was pulled after she questioned the whereabouts of Shelly Miscavige. The exchange she had was all in good nature (or so she thought), but church leaders took the defensive and lashed out at her. She had enough and, now, it seems is willing to expose the church for it’s shady behaviors by taking legal action.

But how far will this police report go? The Church of Scientology responded to an article we published last month regarding Miscavige’s allegedly “missing” wife and Remini’s attempt to expose the church for “thought modification,” etc. They said,

In relation to Ms. Remini: The Church respects the privacy of parishioners and has no further comment. The allegations of “interrogations” and “thought modification” are absurd and pure nonsense, as are all the statements made about the Church’s leader, Mr. David Miscavige. Under the 25-year leadership of Mr. Miscavige, following in the footsteps of our Founder, L. Ron Hubbard, the Church is enjoying tremendous expansion as shown in our new Churches opening in six continents and the many new parishioners joining their congregations.

The Church also mentioned in the email that Mrs. Miscavige is not missing and “Mrs. Miscavige has been working non-stop in the Church, as she always has.”

Let us know what you think about Remini’s war on Scientology. Just how far will she get in these attempts? We’ll keep you updated.

The LAPD has CLOSED its missing persons investigation involving the wife of Scientology leader David Miscavige … because cops had a face-to-face meeting with her … TMZ has learned.

Law enforcement tells TMZ they have determined the missing persons allegation is “unfounded.”

One question we asked that we could not get answered … Did cops determine Shelly was or was not being held against her will?

We also received this email from Church of Scientology Media Relations during the early hours of Friday morning. They asked us to duplicate their response in full:

The Los Angeles Police Department has already stated that the case is closed and that the report filed by Leah Remini was unfounded.

This ill-advised, ludicrous self-promotion and the media inquiries it generated caused an inexcusable distraction for the LAPD in an era when the time and resources of its officers are stretched thin each day. Creating this unnecessary burden for law enforcement was even more irresponsible given the entire episode was nothing more than a publicity stunt for Ms. Remini, cooked up with unemployed, anti-religious zealots who blog on the fringe of the Internet. Sadly, rather than move on with her life and career, Ms. Remini has aligned herself with a handful of untrustworthy, lunatic tabloid sources who obsessively harass the Church to advance their selfish agendas.