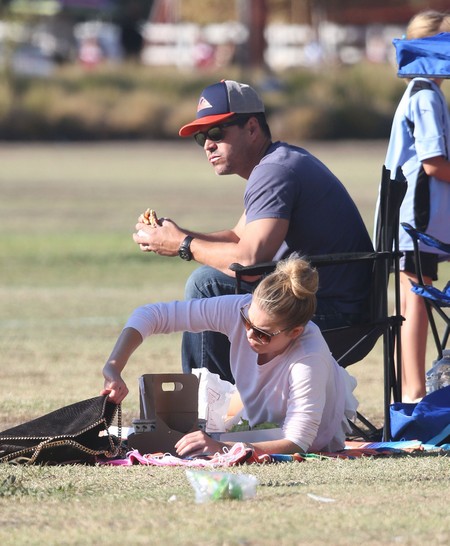 When LeAnn Rimes managed to breakup her marriage to Dean Sheremet, as well as Eddie Cibrian’s marriage to Brandi Glanville she never showed any remorse for her infidelity and those that she hurt. In fact her actions since the affair came to light suggest she is proud of it. She continually taunts Brandi on twitter and otherwise with her wife number two and step-mother status. Not to mention that she hasn’t stopped talking and singing about the affair, and looks to be obsessed with all things Brandi by the way she copies her and stalks her twitter timeline. These days it certainly looks as if LeAnn’s life has become a nightmare, as the weight of all her misdeeds have come back to remind her that in life what goes around comes around.

Two victims of the LeAnn freak show, Brandi and Dean, are doing well these days better off without their sleazy ex’s. They also have formed a friendship that you just know makes the has-been country singer seeing red. Their friendship has also garnered wrath from the dwindling group of LeAnn supporters who attacked Brandi after she tweeted a message with Dean included.

Let me break it down for you the other night Brandi tweeted out a picture of her homemade enchilada’s she was baking. Some of her followers were asking her for her recipe and she said that she would be putting some up on her Facebook, but that she was going to need a little help with the cooking measurements (not her waist measurements as some sites reported) from her friend Dean (who is a chef) because she cooks by taste, and Dean – ever the gentleman – responded. Here is a little snippet of the conversation: 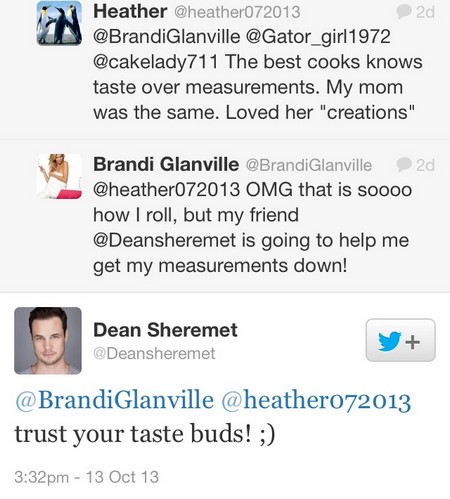 Following the friendly exchange – that had absolutely zilch to do with LeAnn – Brandi’s twitter was flooded with hate messages. Feeling the need to defend her friendship with Dean, Brandi tweeted this: 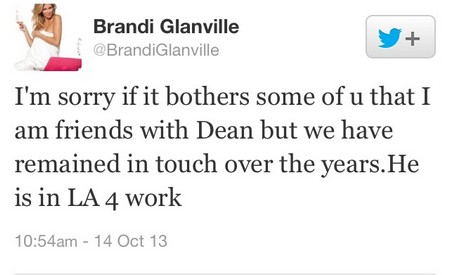 I am amazed that anyone would have the audacity to slam Brandi and Dean for having a friendship. They were both wronged by the same two people, and both experience very public divorces around the same time; that is quite a lot to have in common – and would certainly explain bonding with one another. I think that it is great they found some solace in a friendship with one another. I mean come on – Shania Twain ended up marrying the ex-husband of the woman her ex-husband cheated with. Is it really that hard to believe that two people who shared the same experience would find comfort in each other!?! Ok, now excuse me while I step off my soap box.

As for Ms. Rimes, her twitter has been eerily quiet the past two days for a gal who normally manically tweets her day away. She did take the time the other day to tweet how she was suffering from food poisoning brought on my bad Mexican food: 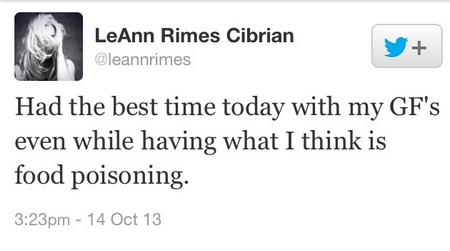 If you follow LeAnn’s twitter you know that this latest ailment is about the gazillionth illness or injury she has suffered in just the last three months. I said it once and I will say it again – girl needs to be checked for Münchausen syndrome (and while they are at it Borderline Personality Disorder). Per usual there was some great responses to her ridiculous tweet (sorry LeAnn but we see right through you). Here are two of my favorites: 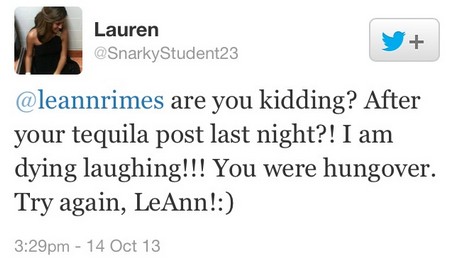 But I must say I really enjoyed this little exchange because it just might be the most honest answer LeAnn has ever given: 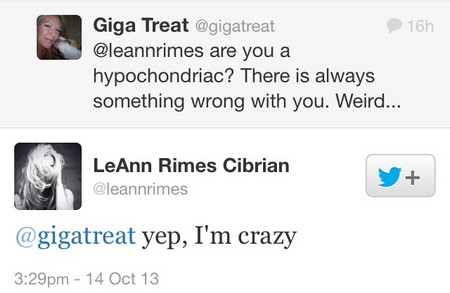 Of course LeAnn later tweeted that she was totally kidding about being a mental case, but experience has taught me there is always – at least an element of – truth in sarcasm. So there you have it, in LeAnn’s own words, “yep, I’m crazy.” Truer words have never been spoken.