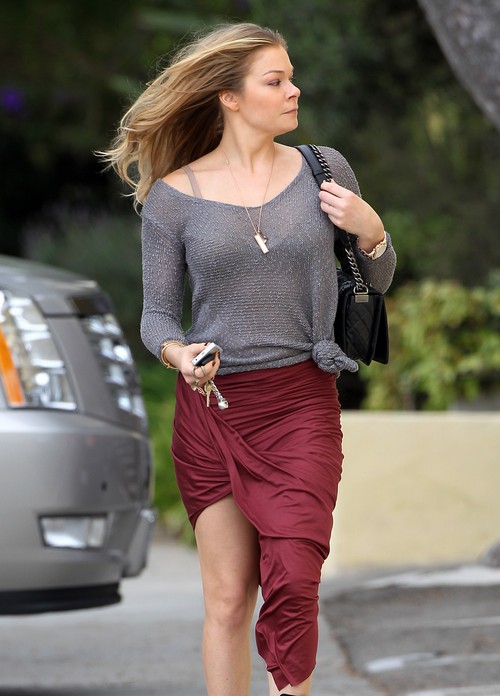 LeAnn Rimes is truly the epitome of poor self-control. She knows that the majority of her bad rep comes from Twitter, yet she never manages to stay off the damn thing. Well, one could also argue that that’s also her only form of publicity, but I don’t buy into the notion that any publicity is good publicity.

Anyway, LeAnn’s latest Twitter war is with Dean Sheremet, her ex. As Celebitchy states, it’s actually quite a nice surprise that it’s not Brandi Glanville, for once. But basically, this all started when some Twitter user decided to upload a picture of LeAnn with Dean many years ago, captioning it, “Remember the good old days when @leannrimes was just a chubby country bumpkin married to a gay dude?”

Instead of letting it go, LeAnn decided to show that she was totally cool with her fans making fun of her and wrote, “Hahahaha I’m gonna choose to laugh at this.” That seemed to rub Dean the wrong way since he then retaliated by tweeting, “Laugh away-Who’s the bully now? I don’t do twitter wars, but I do hate ignorance.”

It seems like LeAnn actually was conscious of the fact that she insulted him because she later uploaded an apology tweet saying that she wasn’t laughing at Dean, but at herself. She also added that Dean’s ‘not gay’ and there’s ‘nothing wrong‘ if he was, explaining, “I have always & will always support the [gay] community.”

Eh, I’m never one to take LeAnn’s side, but I honestly took LeAnn’s response to that question as her laughing [or pretending to laugh] at herself. After all, the poster did call her a ‘chubby country bumpkin’, and I think it was pretty obvious that LeAnn was responding to that, not the gay comment.

Regardless, there’s clearly still ill feelings on Dean’s side, but who can blame him? He did get publicly humiliated when LeAnn’s affair with Eddie Cibrian leaked to the public, and even though he’s stayed relatively quiet about it, that was probably due to monetary reasons more than anything else.