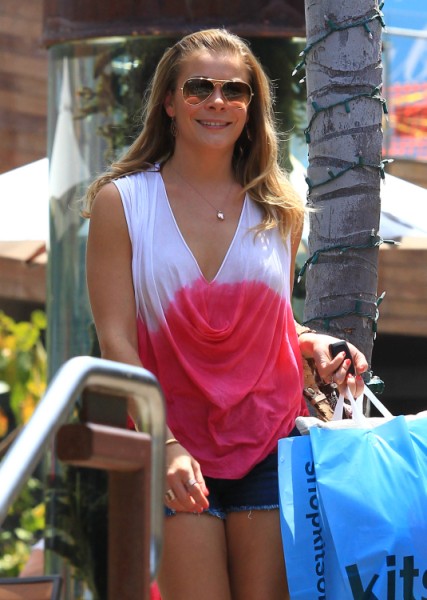 I haven’t heard from these train wrecks in awhile. I almost thought they decided to grow up. Silly me!

Here’s the back story on Mother’s Day. LeAnn Rimes sent Brandi Glanville flowers. That’s it. No, seriously. That’s the story.

I suppose there’s a little more to it. Then Brandi, proving that no good deed should ever go unpunished (especially one cloaked in spite and, most likely, irony) tweeted, “I thanked @leannrimes on twitter4 my flowers. Our relationship is that we still dont even say hi at baseball.”

Then someone told LeAnn and she was all meh about the whole thing. So I guess she took the high road. But was it a backhanded compliment/flower gesture in the first place? Did LeAnn send the flowers because she knew Brandi would tweet about them making herself look like an ungrateful harpy? Brandi does have a point. It’s odd to send flowers when they don’t bother to acknowledge each other in public. If I was Brandi I’d definitely be all WTF too.

Still, maybe we are just heartless, cynical bitches. Maybe LeAnn was really trying to send out that olive branch. But Mother’s Day wouldn’t be the best time to do it, right? Why not a birthday or something? These women have both shit on each other for being less than stellar role models to Eddie Cibrian and Brandi’s kids so flowers on Mother’s day seems like a right slap in the face. It would have pissed me off – even it if was genuine – which I’m sure it wasn’t.

But I could be wrong! What do you think? Is LeAnn trying to put the past behind her with the gesture or was she just trying to get Brandi all riled up?