LeBron James and Savannah Brinson Marry and Beyonce Sings – But Is LeBron Ready To Settle Down? 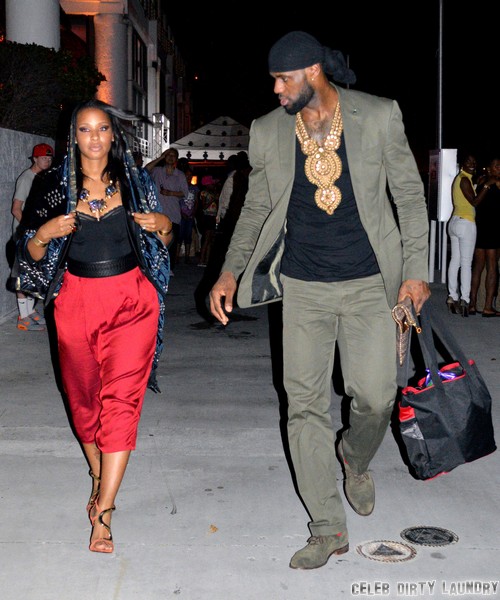 LeBron James may have celebrated winning his four MVP awards and back-to-back NBA championships but now he can add another ring to his collection. The festivities surrounding the superstar’s wedding to longtime girlfriend Savannah Brinson Saturday, Sept. 14th 2013 seemed to blow everything else out of the water and the two-time basketball champion has finally tied the knot. The newlyweds said “I do” at the Capella Chapel at the Grand Del Mar hotel in San Diego, Calif., and about 200 guests attended, including famous pals like fellow NBA star Dwyane Wade, his actress love Gabrielle Union, Jay Z, singer Neyo and many more.

The Miami Heat player, 28, and his new bride are high school sweethearts, and have been together since 16. The two got engaged in January 2012 after James proposed at the Shelborne hotel in South Beach with a pear-shaped engagement diamond. The couple has two children, LeBron James, Jr., 8, and Bryce Maximus, 6.

Savannah wore a strapless white dress with a low-cut back for the big day. Her hair was pulled back in a bun. Following the ceremony, guests were escorted to a hotel ballroom for cocktails, and later to a massive tent for the party to begin. According to TMZ there was a huge surprise for guests, Beyonce and Jay Z performed their 2003 hit “Crazy in Love”.

This was a big deal because Queen Bey flew in for just one night, having just performed at a concert in Brazil Friday for the South American leg of her Mrs. Carter World tour.

Sending happiness to the couple but Savannah beware there will be more women like Video model Carmen Ortega in your future. Is LeBron really ready to settle down? Will marriage end his dirty dog ways? Share your thoughts and advice for the newlyweds!!!!!!