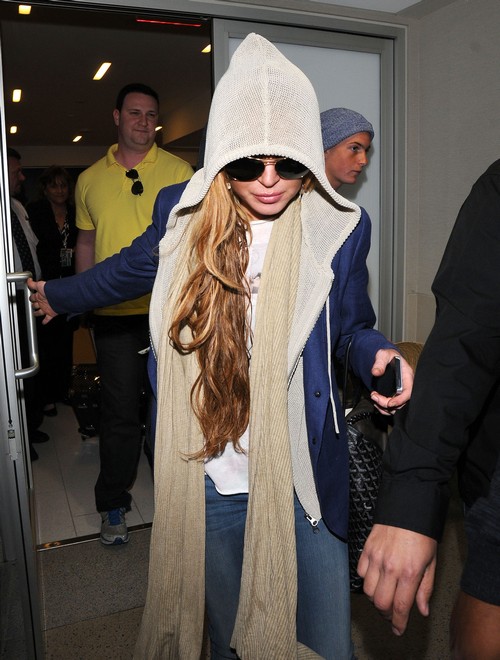 It’s a good thing that Lindsay Lohan has finally gotten herself situated in rehab, otherwise she might have had to deal directly with Alec Baldwin’s irate wife, Hilaria. The chronically troubled 26-year old showed up to see Alec’s performance on Broadway recently and managed to get herself backstage. Apparently Lindsay couldn’t wait to tell Alec how fabulous his stint in Orphans is and so she managed to get a few minutes alone with him.

According to the May 20th print edition of National Enquirer, Lindsay was ranting and raving about how amazing Alec is. She was climbing all over the former 30 Rock star and he appeared to absolutely love all of the attention. Word travels fast though and by the time Alec returned home that night Hilaria was on the warpath. She had heard all about her husbands little meeting with Lindsay and she was none too pleased.

Basically Hilaria laid down the law and told Alec to stay away from the hot mess, which is easy considering a few days later Lindsay was tossed into rehab. Hilaria insists that she trusts Alec, but she is well aware of women like Lindsay that need a sugar daddy to help them out. It’s true that Lindsay’s career could use a major boost and it seems like maybe the only way she’ll ever come back from all of the bad press is to have a Hollywood heavyweight in her corner. Unfortunately for her, it’s not going to be Alec.

Do you think that Lindsay had an ul;ulterior motive when heading backstage after Alec’s appearance? I’m sure somewhere in her mind it totally occurred to her that Alec might be a good person to have in her pocket, don’t you think? Tell us your thoughts in the comments below!