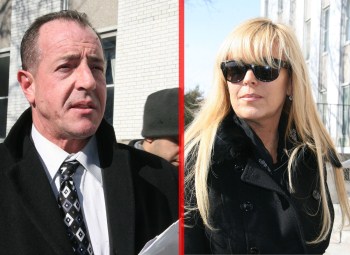 I’m not generally a fan of blaming parents for their grown children’s behavior, but sometimes the past really does explain a little bit of why people end up the way that they do. Dina Lohan has insisted for the longest time that her ex-husband is extremely abusive to women and that she suffered at his hands while the couple was married. Michael Lohan has, of course denied any and all allegations, insisting that he has always tried to fight for his family and what was in everyone’s best interests. Dina recently spoke with the New York Daily News and attributes her daughter Lindsay’s problems to the fact that she was raised in a violent home.

ET’s investigative reporting has actually uncovered several photos of Dina holding a baby Lindsay and in the shots Dina most definitely has a big black eye. The shots are more than 25 years old but of course Michael is quick with an excuse about how his wife got such a shiner. He told ET,

“Dina hit me with an ice tray, and I turned around and swung … I didn’t punch her. I didn’t do anything deliberately to attack her. I swung out of reflex … she’s twisting everything.”

Even Michael admits that he is prone to swing at a woman out of reflex rather than follow the golden rule for men, the one that simply states you should never put your hands on a woman, period. Obviously this was one heck of a dysfunctional couple and it’s a good thing that Dina finally took her kids and left, but they’ve all still suffered. She experienced way too much and her kids likely have memories that no children should have to carry with them.

The photos clearly document violence of some kind and emerging from that kind of environment is never easy. Either people get out and do better almost instantly or else they struggle with demons indefinitely. One thing is positive, both Lindsay and her mother have their demons and both have only compounded the problem with a laundry list of addictions and illegal activities.

Hop on over to ET to see the photos for yourself. Do you think this rough start in life helps to explain why Lindsay is still such a train wreck? Tell us your thoughts in the comments below!