BY Nicholas Sanford on August 15, 2013 | Comments: one comment
Related : Television 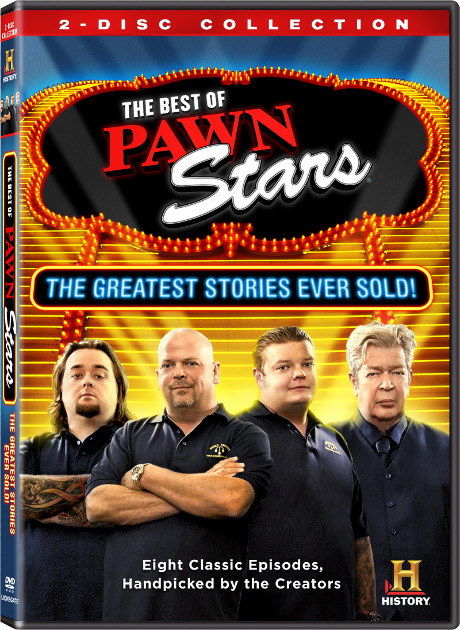 One of my guilty pleasures in television land (though perhaps I don’t need to feel so guilty about it) is watching those great shows about people who find something old, really old, and either sell it for a pretty penny or learn of the item’s magical story. There are a lot of great, educational, humorous shows that follow similar premises, but some of my favorite “treasure finding” series currently on television are American Pickers (History Channel), Pawn Stars (History Channel), and Storage Wars (A&E).

On August 20th, Lionsgate Entertainment will be releasing three special DVDs from these three series, and each collection will include special episodes handpicked by your favorite reality TV stars (Kardashian drama not included; not that kind of reality TV). The Best of Pawn Stars: The Greatest Stories Ever Sold, The Best of American Pickers: Mike and Frank’s Picks, and The Best of Storage Wars: Life in the Locker are all really fantastic collections — we can attest to that fact — and highly encourage you to check them out when they become available.

Pawn Stars is one of my fave TV shows to have on in the background when I’m chillaxing in the afternoon, and this 2-disc collection features one of my favorite episodes, during which Old Man purchases a fantastic book that belonged in Isaac Newton’s Library. Not only was the book authenticated, but it included handwritten marginalia and a signature by Sir Isaac Newton himself! The fun, goodhearted dynamics between Chumlee, Corey, Old Man, and Rick make for a humorous time — all while learning a bit more about the world and the items people have cherished throughout the ages.

Look for a giveaway of all 3 DVDs on Monday, August 19th!

I’ve always admired American Pickers for its archaeological approach to seeking out treasures. The show features Mike Wolfe and Frank Fritz as they journey across America, scouring people’s junkyards, homes, backyards, and shops in attempts to locate beautiful relics to be restored and sold to the perfect buyer. This 2-disc collection contains seven episodes, one of which shows the team coming across the holy grail of all motorbikes!

In the Storage Wars DVD, the cast reveals some of their best buys and worst buys — those abandoned treasures found in auctioned storages. I’m sure fans of the show will find this episode set to be a wonderful addition to their collection. Fans will love revisiting the highs and lows of the modern-day treasure hunters: Barry, Jarrod, Brandi, Darrell, Brandon, Dan and Laura. Each episode features newly filmed introductions by each of the cast members exclusive to this DVD set.

These DVD collections will be released in stores next Tuesday, August 20th. Look for the contest and your chance to take home all three DVDs next Monday!

Disclaimer: We were sent review copies of the above mentioned DVDs; however, we received no other form of compensation. All opinions expressed here are those solely of the writer and not of Lionsgate nor its participating sponsors.