BY Robyn Good on April 8, 2013 | Comments: one comment
Related : Dancing With the stars, Dancing With The Stars Season 16, Performance Videos, Reality TV, Television 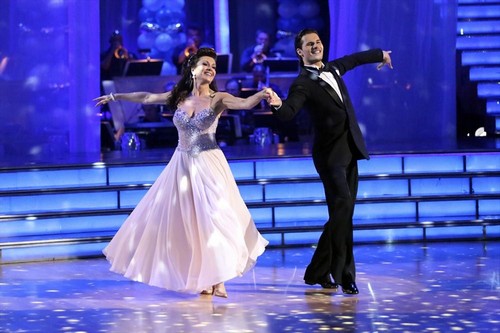 LISA VANDERPUMP danced a CHA CHA CHA, on the fourth episode of Dancing with the Stars: 2013 performance show tonight. Each couple will dance to a song of the celebrities’ choosing that represents a memorable time or experience in their life. In addition, each celebrity is challenged to perform a brief solo during their performance. If you missed the show, we recapped tonight’s show for you and if you want to see how all the couples did go HERE!

Lisa reportedly fainted in rehearsal this week and “Entertainment Tonight” is reporting that she may leave the show but if she does leave it will not be to her fainting but her non dancing skills and not wanting to continue this embarrassment as a Beverly Hills Housewife.

Judges’ Comments:  Len said, “You have been poorly, you gave it your best shot.  For what you have been for, you did a great job!”  Bruno said, “There are a few mistakes but you are under practiced.  What you did you did well.”  Carrie Ann, “I wish you had more time to do practice.  Gleb lifts this is your second warning.  You have potential.”