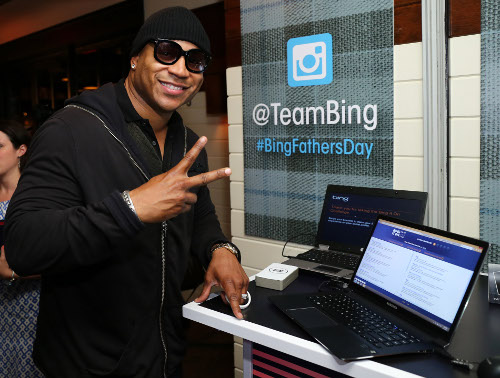 LL Cool J teamed up with Bing to celebrate Dads everywhere at a special Father’s Day event in New York City. The actor/ rapper made an appoint to make an appearance at the event after attending his daughter’s high school graduation. Cool J is a father of four, so he knows what it means to be a fdad and how nice it feels to be appreciated.

The event consisted of a smattering of stellar activities and fun games. People who attended the event participated in father’s day themed activities, including the following:

· Test Your International Barbeque Knowledge: Does Dad love barbeque? Self-proclaimed barbeque connoisseurs tried to match barbeque sauces to their countries of origin using the Bing Translator tool
· Dad Knows Best? : Dad’s IQ was put to the test when they competed against a NYC trivia expert using Bing’s snapshot feature
· Is Dad Stuck in the Past? Dad’s took the Bing It On Challenge to see the benefits of Bing versus Google

Throughout the day people employed Bing and even walked away with some newfound knowledge regarding the search engine and its capabilities. The event was part of the Bing it On Challenge, which was introduced in 2012. “Bing It On” is challenging America to click and choose which web search results it prefers. An online tool at Bingiton.com lets people compare unbranded web search results and pick which one they prefer based on relevancy of results, the leading driver of search engine preference. After five searches, the tool reveals which search engine they liked better.

We have some pictures of the event for you below. Be sure to check them out and let us know what you think!

All image credits to Bing/Getty Images