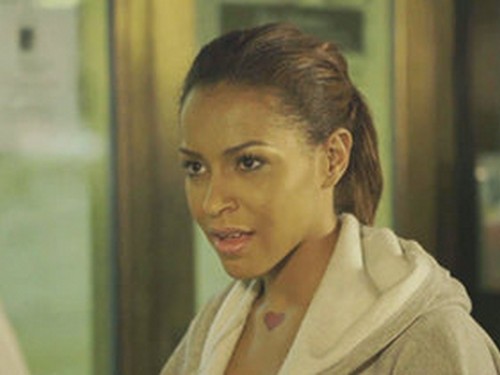 Tonight on VH1 LOVE & HIP HOP continues with a brand new episode called, “Girls With Gunz.”  On tonight’s show a relationship might be rekindled when Tahiry and Joe chance upon one another; suppressed emotions impact love .

If you have not watched the show before back in the City That Never Sleeps, new dreamers and fresh talent join the ranks of fan favorites on “Love & Hip Hop NY.” In New York City, these movers and shakers will stop at nothing to get to — and stay — at the top.  Much of the heat this season is generated by a crazy love triangle involving rapper-turned-manager Peter Gunz.  Joining the New York cast this season is Atlanta favorite K.Michelle, who has released her chart-topping debut album and is relocating to the Big Apple to take the music scene by storm.

On tonight’s show a chance meeting between Tahiry and Joe threatens to rekindle their relationship. Buried emotions get the best of Erica Mena and Rich. New talent teaches Yandy a tough lesson, while K.Michelle leads Tara into a confrontation with Peter and Amina.

Tahiry is trying to enjoy New York Fashion week when she runs into her ex, Joe. He keeps trying to talk to her and it’s possible he’s thinking of reconciliation although he claims he just wants to talk. Still talking doesn’t mean attempting to kiss her. He continues to hang around and doesn’t leave her side at any time during the fashion show. Afterwards he gives her his coat when he notices it began raining while they were inside. That’s sweet but not sweet enough for her to forget what he did. She managed to once again leave with the last word.

Amina needs to talk to her twin sister. Only Sophie will tell her what she needs to hear even if she won’t like it. She needs to know is she can stay in a relationship with Peter. Right now all she’s hearing how he’s still into his ex. Can she trust him to be with her and not want anyone else?

Erica has start informing people she signed on with Rich. She feels like this would be the best career move and so she did it without telling any of the people that care about her. Doesn’t really makes sense yet she did it anyway. Maybe she knew the feedback. The moment she told Cyn she got warned to be on guard. Rich will try something and it’s best Erica doesn’t get her hopes up.

Erica goes into the studio where she hears what Rich has done this far. She’s liking her tracks when Rich ruined her buzz. He mentioned the fight he got in with Peter over her. At the end of it he chose to side wih Eriica and he wanted her to know it. Despite what she said to her friend; Erica is happy to be back with Rich as in back with Rich!

Peter is playing with both of the women. He told Tara that he was willing to leave Amina for her and now she doesn’t know what to do. So she asked longtime friend K Michelle. K said that she should get all three of them together to talk it out. That’s an guaranteed way he won’t try to escape from anything he has said or will say in the future.

Tara takes her advice and goes into the studio when she knows Peter is there with Amina. She tells Peter now is the time to be open. When he doesn’t admit to what he did then Tara does it for him. She tells Amina she’s still sleeping with Peter. Amina was furious and walked out crying. She came back later to though to talk. She told him she didn’t want to be like Tara. He needs to choose and when he can’t; she tells him that she’s leaving him.

Yandy has gotten some happy news. Her fiancée has a bail hearing coming up and she wants to how to proceed from there. But she didn’t think her friend and rapper, J Deniro, would tell her that bail hearings don’t mean anything in the grand scheme. It could be months before a hearing get scheduled.

After their kiss at the studio, Erica hasn’t seen Rich. She wants to know if Rich has feelings for her because she’ll drop Cyn if that door is open. Erica admits Cyn treats her like she’s the best but there’s something about Rich. She needs to be wanted and he tells her she should know what she wants. Especially before she starts making demands.

Faye, Joe’s mother, is celebrating her 25th anniversary of her sobriety. She invited Tahiry to share in this moment but before long Tahiry realizes the celebration is a set-up. Joe wants her back and enlisted his mother to help him. Well too bad! Tahiry is truly trying to stick to her guns this time and that means not forgiving Joe.

Tara is out on to dinner for her birthday. She was talking with her two friends when she brought up Peter. She mentioned the showdown and claimed she was over Peter. No surprisingly no one believes her. She’s done that before and each time she goes back to sleeping with him. Yandy is going help break her out of that pattern. She wants Tara to concentrate on her own career and the first step is for her to be in Yandy’s new movie.

Erica is confused and she went to close friend Albee. She told him how she couldn’t trust Rich like she could Cyn but that doesn’t stop her from wanting him. He informed her she shouldn’t risk the good thing she has with Cyn.

Amina starts laying down ground rules. She never met her stepsons and he spends too much time around Tara. He either needs to start listening to her or let her go.