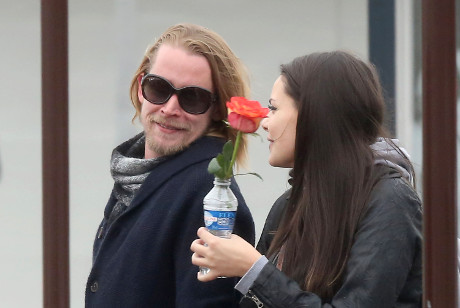 Macaulay Culkin, after worrying fans with his unhealthy, frail appearance over the past years, was photographed in Paris recently alongside a mystery girlfriend. And, let us tell you, he was looking much better! The actor, who’s allegedly had problems with drugs in the past, appeared to have put on some more weight and an all-around better glow — probably enhanced by the lovely lady on his arm.

Culkin touched down in Paris on Friday and sources claim that he immediately went in search of a red rose to present his new girlfriend. Onlookers say he’s transitioning away from those dangerous years of his life and is preparing to launch a much healthier lifestyle, perhaps with someone special!

Check out the photos below and let us know what you think about Macaulay Culkin’s girlfriend as well as his healthful new look. He still has that unfortunate beard situation, but that’s easily fixable with a quick shave.