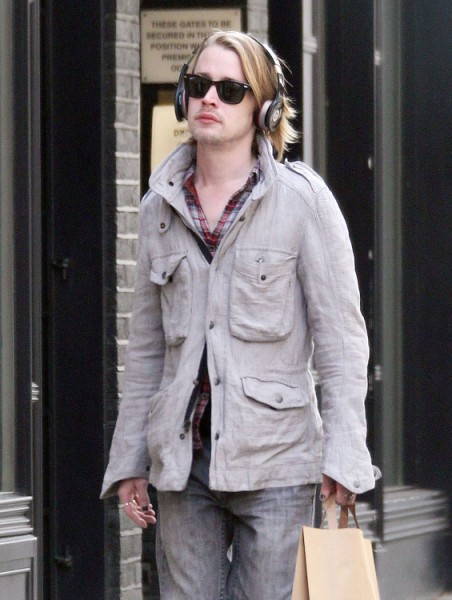 So, according to reports, what I wanted to happen happened – only I didn’t get the result I wanted. Apparently, Macaulay Culkin didn’t either.

Macaulay tried to hook up with ex-girlfriend, Mila Kunis, while in London but she wasn’t having it. According to the National Enquirer, she wasn’t turned on by the whole derelict thing he’s got going on and told him to get lost. Now his friends are worried that he’s going down a major shame spiral and may not be able to recover.

“Mac was desperate to hook hook up with Mila, and he saw this as his big chance,” a source said. “Mac thought it was a great opportunity until Mila deep-sixed the idea. Now Mac’s friends fear that he’s so devastated he could wind up in another life-or-death situation.”

His friends are always worried that he’s in another life-or-death situation. The kid is kooky but that doesn’t mean he’s necessarily at death’s door all the time. But I’m losing faith in Mila Kunis. I can’t really blame her for not wanting Macaulay back. He implies a lot of effort to me and she’s probably tired of it. But I can never understand Ashton Kutcher. Maybe I can actually. Maybe he’s not work. Maybe she doesn’t have to think so hard with him. Maybe he’s just pretty and easy. That’s got to be light years away from the Macaulay relationship. So she can have her break for now but she needs a happy medium. Let’s find one for her!

Did Mila Kunis reject Macaulay or is this a made up story since they were in the same city at the same time? Do you think we’ll ever have a Mila Kunis/Macaulay Culkin reunion or is Ashton it for her? What do you make of my Goldilocks theory? Is Mila just dating the extremes right now? Has she yet to find the happy medium?