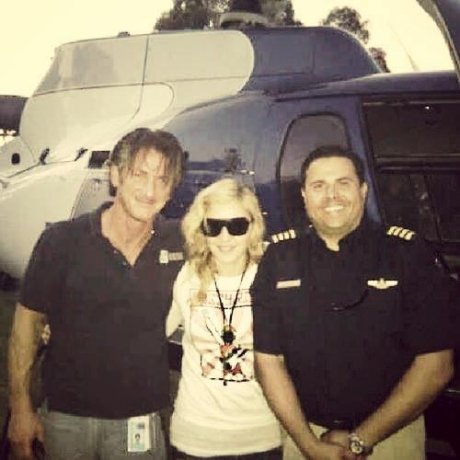 Wow, this is something I never in a million years thought we would ever be talking about! Nearly 30 years after romance first blossomed, it looks like Madonna and Sean Penn are giving it another go. She has been linked to Brahim Zaibat for the last 3 years and Sean has often been spotted with a younger woman on his arm, but it seems that the two have cleared the way to reunite. Zaibat has spent this past fall working on the French version of Dancing With the Stars and is rumored to have gotten super cozy with his pro partner, Katrina Patchett according to Radar Online. When Zaibat was spotted in NYC with Madonna last month he looked absolutely miserable and the writing appeared to be on the wall.

Meanwhile, Madonna and Sean have recently reconnected at a charity event and things have been going well. So well in fact that the couple decided to take a trip to Haiti before Thanksgiving and they even brought Madonna’s son Rocco along for the fun. In the past Madonna has been pretty careful about involving her kids in her relationships with men so this seems to indicate that she believes that Sean will be sticking around for awhile.

Isn’t it kind of cool to see Madonna and Sean back together again? It makes me wonder if they really were the real deal and just needed time to experience other things before they could eventually get it right. Would you like to see them make it this time around? Tell us your thoughts on the new old pairing of Sean and Madonna in the comments below!