BY Amanda Austin on December 30, 2013 | Comments: one comment
Related : Uncategorized 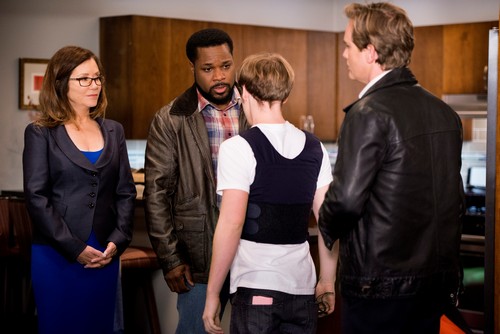 On tonight’s show aA year-end blowout sale becomes literal for a used-car lot after one of its owners is killed when a bomb explodes. While the squad tries to find who is responsible, Rusty dons a bullet-proof vest under the watchful eye of Lt. Chuck Cooper (guest star Malcolm-Jamal Warner), a Special Investigation Section (SIS) supervisor, in an attempt to catch the person responsible for threatening his and Sharon’s life.

Tonight’s episode of Major Crimes opens with a used car commercial for Ted’s Auto Sales.  A horribly made commercial.  Ray and Little Ted are trying to convince his Dad that the commercial is not okay.  Little Ted has other problems though, his wife Olivia now owns 1/8 of Ted’s Auto Sales and he is trying to get her to agree to sell it back to him.  Little Ted heads downstairs to hand out his employee’s pink slips, that they aren’t expecting.  They are less than pleased.  Little Ted hops in one of his cars and prepares to drive it off the lot, and then it explodes and bursts into flames.

Lt. Provenza and the rest of his team arrive at the car lot to investigate the bomb.  Big Ted is being loaded into an ambulance, he went into cardiac arrest when he found out his son had died in the explosion.  The firefighters on scene won’t let the police investigate the lot until it has been cleared by the bomb-squad and they are sure there are no more bombs.  They learn that the Mercedes that Little Ted climbed into and exploded, was previously rented out to an Iranian business man.

Rusty and Sharon are en route to the explosion.  Rusty is driving erratically, and she forces him to pull over and let her drive.

Back at the crime scene the cops have found Ted King’s fingers on the roof of the car lot.  Sharon arrives and she sends Amy to go help Rusty learn how to parallel park.  They learn that the bomb in the Mercedes was set off by a trigger, and that it wasn’t normally the vehicle he drove.  Whoever set the bomb off probably didn’t know Ted was going to be the one driving the Mercedes.

Amy is lecturing Rusty on safety, he has a drivers’ test tomorrow that will determine whether or not he will make the team.

Back at the office they are trying to determine whether or not the bomb was related to terrorism since the previous driver was Iranian.  Andy reveals that their search warrant to access the dealership’s financial records.  They do find an email from a lover of Teddy’s that he has been cheating on his wife with, and it is a man.  They bring in Teddy’s boyfriend for questioning, and he reveals that Teddy was giving him the Mercedes that exploded.  Darren, his boyfriend, confesses that him and Ted were engaged and planning to be married.

Sharon pays Ted’s wife Olivia a visit, and learned that she was well aware of his affair and they were getting a divorce.  Olivia was also suing the dealership because Darren was helping Teddy hide the financial records from her.

According to the bomb-squad the bomb was set off with a remote.  Whoever killed Teddy had to be within 100 ft of the Mercedes when it exploded.  Sharon and the rest of the team realize that Teddy’s credit card was used to buy the supplies for the bomb that killed him.  They are afraid that there is a second bomb out there though, based on the amount of supplies that were bought.

It’s time for Rusty’s test.  He ensures Sharon before he starts that “he can handle this.”  It’s time for him to start the essay portion of his test.  Amy leaves Rusty with Lt. Cooper, and he will be issuing him the test.  Rusty is concerned about his test, he learns that when he goes out into the field for his test he will be all alone and won’t have any agents with him.

Sharon and her team pays Big Ted and Ray a visit.  Big Ted insists that none of his employees had anything to do with his son’s death.  They were given their pink-slips seconds before Teddy was killed, they wouldn’t have had time to plant a bomb.  Big Ted refuses to turn over his financial books to the police though.

Bomb Squad located the second bomb.  It was installed in Ray Winter’s (Big Ted’s right-hand man) car.  Coincidentally the remote to the second bomb was in Teddy’s wife Olivia’s car.

Rusty is preparing to go undercover for his test, he will be trying to catch the person that has been sending him threatening letters.  Sharon is extremely nervous for him.

Meanwhile Provenza and Flynn are questioning Olivia about the remote they found in her car.  Olivia claims she has no idea where the remote came from.  Olivia has an alibi though, she was actually in court, fifteen miles away, when Teddy was killed.  There is no way she could have detonated the bomb.

They bring Bid Ted and Ray in for questioning.  Olivia gave them access to the dealership’s bank accounts.  They found a secret account called “Ted King Auto” that has been transferring $1,000.00 a week to a bank account in the Cayman’s Island.  Ray has been embezzling money for over 30 years.  Ray killed Teddy so that his embezzling wasn’t discovered, and he planted the bomb on his own car so that he didn’t appear suspicious.

Meanwhile the team is watching Rusty on video, to see if the person that is threatening him approaches him at school.  A man sits down with him and passes him a note, “Turn your wire off or your Mom dies.”  Rusty turns his wire off, and the strange man gives him instructions to get in his car and drive, he plans to follow him.  He also instructs him not to send his team the safety signal.  Rusty gets up and heads to his car.  Amy is waiting in the back of the car for him, it was a test, and he failed.  It doesn’t look like he will be joining the team anytime soon.