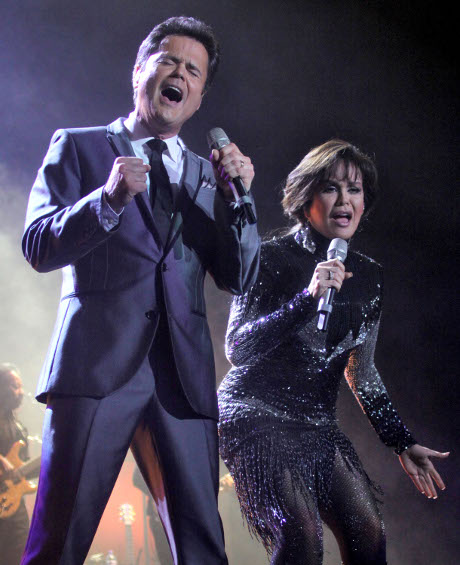 All siblings seem to have some type of rivalry between them and Donny Osmond and Marie Osmond are no different. They supposedly try to put their differences aside in order to work together and that works while onstage, but behind the scenes it’s a totally different story. That’s when resentment and a fierce rivalry runs completely amok. According to the June 3rd print edition of National Enquirer once the brother and sister acts’ current contract is up with Flamingo in Las Vegas, Marie will be ready to move on in her own direction.

Their 90 minute stage show has been running since 2008 and they re-upped their original contract because the show itself is very popular, but at this point it’s just not worth the hassle. Donny has always wanted a solo career but has struggled when given the opportunity. He supposedly has a talk show currently in the works that looks promising, but for some reasons his fanbase just isn’t as solid as his sisters.

Meanwhile Marie is a successful author, talk show host, and doll maker — plus a popular pitch-woman. In other words, she doesn’t need her brother to maintain a successful career and she also doesn’t need to put up with his control freak antics behind the scenes. She felt bad leaving him because she knows that his solo career isn’t as good as hers has been, but Marie has had enough. She just wants to go their separate ways professionally once and for all.

Why do you think Marie has enjoyed more seduces than her brother? Do you think he can get a talk show off the ground that will last more than a season? Or should he look at other opportunities instead? Tell us your thoughts in the comments below!