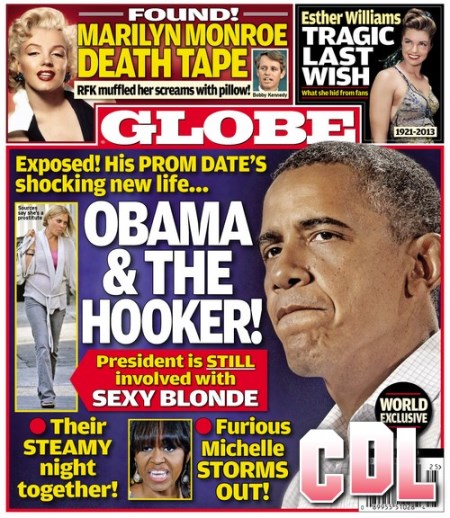 GLOBE reports on this week’s Jun 24th cover that Marilyn Monroe’s death tape has been discovered!  It appears as if a private investigator was bugging Monroe’s room when she died and he kept the tape.  Hollywood private investigator Fred Otash was the man alleged to have made the recording while on the case.  Fred is dead, but his daughter discovered notes on the case in a locker owned by her dad.

These notes are truly shocking – so much so that only GLOBE has the courage to reveal the uncensored version.  We won’t give away the details – you’ll need to read them in this week’s GLOBE – but suffice to say that Marilyn appears to have been having sexual relations with more than one Kennedy brother.  Even wilder, we learn that one of the brothers may have been physically involved directly in her death!

This week’s GLOBE features an expose on Esther Williams and her tragic last wish.  GLOBE finally reveals what she hid from her fans – what do you suppose this was?

All of the above makes for some heavy duty hot reading – but GLOBE reaches further! In an exclusive report GLOBE exposes the current status and lifestyle of President Obama’s prom date – and apparently the FLOTUS is not too happy about it.  According to GLOBE, Obama’s prom date became a hooker and the POTUS is still involved with the sexy blonde!  GLOBE further states that Michelle Obama was so upset about all this that she stormed out on the leader of the free world.  Yikes!

All of this news leaves me rather weak with shock and anticipation to read the details available on these amazing stories.  GLOBE is unique in its relentless pursuit of the truth and its unerring sense of what will fascinate its readers.  I’m heading to my nearest newsstand as soon as I submit this article because I can’t wait to read all about this amazing news.  Leave it to GLOBE to continue to entertain and educate its readers while covering all the hottest news out there.