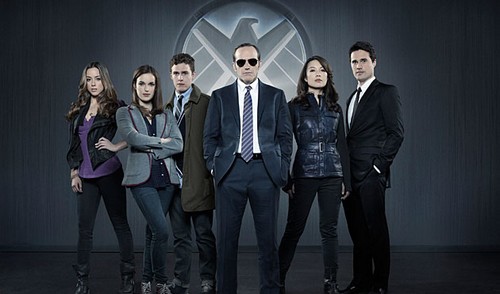 Tonight on ABC their new dynamic, action-packed one-hour drama MARVEL’S AGENTS OF S.H.I.E.L.D premieres.  The new show was created by creative genius Joss Whedon the man behind Buffy The Vampire Slayer and Marvel’s The Avengers.

The series begins where the “Marvel’s The Avengers” left off. It’s just after the battle of New York, and now that the existence of super heroes and aliens has become public knowledge, the world is trying to come to grips with this new reality. Agent Phil Coulson is back in action and now has his eye on a mysterious group called The Rising Tide. In order to track this unseen, unknown enemy, he has assembled a small, highly select group of Agents from the worldwide law-enforcement organization known as S.H.I.E.L.D. (Strategic Homeland Intervention Enforcement and Logistics Division).

The S.H.I.E.L.D. team has a mission: “To investigate the new, the strange and the unknown around the globe, protecting the ordinary from the extraordinary.”

Tonight’s series premiere of  Marvel’s Agents of S.H.I.E.L.D. looks like it is going to be great new series and you won’t want to miss it.  Make sure to tune in for our live coverage of ABC’s Network’s “Marvel’s Agents of S.H.I.E.L.D.” at 8:00 PM EST! While you wait for our recap hit the comments and let us know how excited you are for this new series!

RECAP: Many cuts of the city, with flashbacks from superheroes Hulk, Iron Man, Thor and Captain America. Then it cuts to a young boy deciding on an action figure of one of the superheroes for his birthday with his father, they are interrupted by a nearby building exploding. The father runs towards to building that exploded to help people in need, it turns out he’s got super powers of his own and begins scaling the building. he enters the building and it’s completely set ablaze by flames, he saves the woman and jumps out of the building making a perfect and awesome landing that puts cracks into the street. A woman records the man before he leaves, the man is then seen with his son. It cuts to Paris and Agents are currently on a mission, Grant enters and disguises himself as a waiter to get the hand print of a man and then uses it in his room to find something. Grant is then discovered and has to fight his way through several men, he then is seen on the roof escaping by a helicopter. Grant is in a room talking to a female agent, they speak about the past of The Avengers movie and the battle of New York was supposed to be the end of the world. Grant wants to know why he was pulled out of Paris, knowing that Phil Coulson was killed in action; though Agent Coulson appears from the dark revealing he’s alive. Coulson, Maria and Grant walk through the agency speaking about the heroes and Coulson speaks about him self a bit. The three of them watch a video that reveals the man who saved the woman from the building. Phil Coulson wants to find this man due to the super powers he’s obtained, Grant wants to go in alone and gloats about being able to defuse a nuclear bomb. Phil goes over Grants file, a scientist appears and says that Agent Ward too fit and is dismissed. Maria believes that the entire roster is sketchy, and speaks with Coulson.

The scientist then asks Skye if Coulson knows about himself. We then see Mike Peterson with super powers sitting in a restaurant watching the woman’s reaction he saved on the news, Skye then finds him and approaches him in the restaurant saying she knows about his super power saying that he should embrace it more and that he’s in danger by shield. That Shield is going to be coming for him and that they were behind the battle of New York, Skye wants him to go out and let the world know that he’s a hero, she wants to help him with getting him started as a hero. Skye makes a quick reference to the popular and well known Spider-Man quote. Phil Coulson is in the agency speaking Melinda about an upcoming mission and needing her for it, though she’s reluctant about doing so. Coulson persuades her into joining him. Grant is headed to a plane to board it and make his way to his next mission, then we’re introduced by to young agents, Jemma and Fitz. A red car pulls up and we see Coulson get out of it, the car is a collectible and favorite of his. Grant and Coulson make conversation as they walk through the ship, they both meet with Melinda and talk about the upcoming mission. Melind walks away and Grant asks what Coulson is planning. The aircraft then begins to take off, we then see Skye speaking about how she can’t be stopped and is soon discovered quickly by Coulon and taken in.

Coulson and Grant make their way back to the ship after capturing Skye, Coulson and Grant interrogate Skye about what she’s trying to do; they know that she recorded the super hero with her phone and wants to know who he is. Skye tries to make it hard for them to get information on what she’s doing, they ask her about how she got the footage of the hooded super hero. Grant mouths something to Coulson, Skye then gloats about her hacking skills and Shield not being able to detect her and then Grant asks about Centipede.

Mike is seen on the phone talking to someone unknown on the phone about how what he’s got on his arm is working which is assumed to be what gives him his super powers. Melinda and the Jemma are searching for evidence with Leo, Leo being the smart man he is brings out drones of some sort to do some scanning. Coulson and Grant continue their interrogation with Skye wanting to get more information from her, Skye is still trying to defend Mike. Grant and Coulson leave the interrogation room to speak to each other alone, Coulson mentions how Skye is an asset and tells Grant that they need what she knows. The Jemma, Melinda and Leo are still searching for evidence in the recently blown up building, Leo’s scanning drones find a camera that they are still able to get footage from. The young agent finds something that’s out of this earth. Coulson and Grant are back into the interrogation room trying to use a truth drug on Skye, Coulson injects Grant to show her that the injection works. Grant is then left alone with Skye in the interrogation room, it cuts to Mike and his boss walking, Mike is being let go from his job due to an injury he had. Mike then loses himself to his anger and pushes his former boss to the ground, but then goes the extra mile and ends up killing him.

Coulson and Skye are both talking about Grant, they both then watch how Michael lost it at his boss on the news. Coulson starts briefing the agents on Michael to get them ready for their mission on getting him. During the briefing Skye helps them with out with decrypting the files and is escorted by Melinda. Michael visits the hospital to see a woman and asks about how she said things would change, they obviously have had quite the past with each other. Mike is says he’s trying his best not to lose him self to the power and says it’s only an origin story. It cuts to Agent Leo, Skye the young female agent, Coulson and Grant. Leo finds footage on what he found, it shows a man getting angry at a scientist. They find out the man in the footage has a centipede on his arm the same as Mike’s. Skye steals a data chip, Mike appears out of nowhere trying to “save” Skye. Mike knocks out Melinda and makes his way with Skye and his son. Coulson, Grant, the young female agent and Leo find out that the centipede its self is a bomb of some sort.

Grant is seen changing the scope on a gun, Jemma appears and tells Coulson that Mike will detonate in a few hours. Coulson tells Jemma that she needs to find a third option that’ll save Mike’s life. Melinda calls Coulson and updates him on what happened to her. Skye is putting her hacking skills to use to help out Mike, Mike doesn’t know if he can fully trust her. Leo starts to panic with the current situation, and finds out that the security has been breached due to hacking. Skye sent the coordinates to the Agents with her hacking skills so they can save her. Mike wants to leave New York with his son to have a better life with him, Coulson and Grant are making their way to the car to save Skye from Mike. Mike does not seem pleased and blows open the car door and takes Skye and his son with him into a airport. Skye kicks a poor civilian in the balls creating a distraction for Mike, in order to buy time for the agents. Coulson gets the son out of danger and Grant beings to fight Mike one on one. Grant gets Mike in a choke hold but that doesn’t last long, Mike breaks free and find Skye, he then once again runs away with her again. Coulson tells Grant to only take the shot if he has to, Mike wants to know where his son has gone and is clearly angry. An officer shoots Mike off of the edge and he hits the floor, Melinda kicks the cops ass soon after. Coulson appears before Mike and puts down his gun, Coulson understands that what Mike has is poisonous and Coulson tries to reason with Mike. Mike admits to wanting to be a hero, Grant takes the shot and shoots Mike in the head. Though the shot did not kill Mike, he’s alive. It cuts to Coulson and Skye speaking about what they just experienced with Mike, they then get into a car which turns out is able to fly.