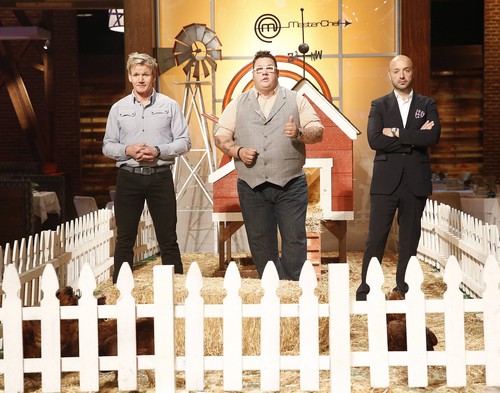 On episode 6 of MASTERCHEF JUNIOR called, “Finale Part 1,” the kids come into the kitchen to find some fowl wandering around to their astonishment. Gordon tells them it will be an egg “boil off” and demonstrates what a properly cooked egg will look like. The kids will not get a time and they will only get one egg!

The final four are in an egg challenge. They must cook a perfect soft boiled egg!

Jack’s egg is not done properly and Graham has to give him the bad news. Dara is up next. Joe asks how long she cooked and she says she doesn’t think it’s perfect. Joe cuts into her egg. Joe shakes his head – her egg is hard-boiled. He says it’s a very difficult challenge. Alexander is up next and has no idea how the cook on his egg will be. His gut is telling him he nailed it. He tells Gordon he timed it to three and a half minutes. He expects his to be perfectly soft boiled. Gordon cracks it open and the white is soft but the yolk is hard boiled. He’s devastated. He says he cooks them all the time and doesn’t know how he messed up.

Gordon goes next to Troy. The closest competition is Dara who’s is closes to soft boiled. Gordon cuts into his egg and the white is firm and the yolk is nice and runny. Gordon tells him that although it’s not perfect is the closest to a soft boiled egg. Troy wins it and will get an advantage in the next challenge. Gordon says it’s game changing and unlike anything they’ve ever given out before. Alexander worries he’ll use it against him since he’s Troy’s biggest competition.

There are four dishes up front featuring four different cuts of chicken. Troy gets to choose the cut of chicken he will use and which part everyone else will get to use for the next challenge.

Joe asks what parts he’s going to assign. He tells Troy to grab his part first. He goes for the thigh. Troy says it’s not the easiest but not the hardest and he thinks he can do a good sauce and win it. Graham tells him to hand a tray with a part to each of the other competitors.

Troy starts with the liver and says it’s Alexander. He hands it to him and Alexander whispers – I’m going to kill you. Troy hugs him and says he’s sorry. Troy gives the wing to Dara. Jack gets the breast. Jack says that he’s not done yet.

Joe tells them the two best dishes will move to the finale. Graham tells them they have one hour of cook time. The kids all run to the pantry.

Dara says that him giving her the chicken wing was a big mistake and she’ll be in the finals. Jack comes out with a huge basket of stuff and refuses Gordon’s invitation to help carry.

Joe says he thinks they’re going to do some amazing dishes. Troy is doing pan fried chicken with squash salad. Dara is going with soy and ginger and says she’s cooked wings a lot. Jack is going with goat cheese and sun dried tomatoes.

Gordon tells Alexander he’s got a target on his back. He reminds Alexander that he’s never cooked liver and asks if he can turn it into a winning dish. Alexander is so focused he can’t even answer him. Gordon leaves him alone to work. Alexander says he’s going to pack his bags because he knows he’s in trouble.

The kids are scrambling as Graham reminds them that two of them will be headed home. Gordon tells the other judges that Alexander is out of his comfort zone and having problems. He decides to make a pâté.

Jack asks if he can run back to the pantry and Gordon jogs with him. Gordon helps him find flour in the pantry. He tells Jack that cooking with him is like running a marathon. The kids are all busy, busy.

Gordon is amazed at how much Jack is trying to cook and ask if he’s drinking! Gordon gives him some tips. Jack runs off to the bathroom.

Joe comes to talk to Troy. He asks if he doesn’t want to put on a second thigh as an insurance policy. Troy turns him down. He says he’ll be done in 10 minutes and Joe wishes him luck. There’s 15 minutes to go.

Dara is deep frying her wings. She tells Gordon that hers are gourmet Asian wings and are not cheap food truck wings.

Graham says Jack’s looks amazing and Gordon is amazed that the kid is still in elementary school. They talk about how focused and composed Dara is. Gordon says she smirked when Troy gave her the wings and Gordon says she thinks she’s got one foot in the finale. They count down from 10 and the kids are all done. They applaud the four finalists.

Gordon starts with Troy since he had the advantage. He has prepared fried chicken thigh with Romesco sauce. Gordon says it looks good and is nicely plated. He used herb oil with a little cilantro to edge the plate. Gordon tastes and says the sauce tastes fresh and delicious. He cuts the chicken and says damn, damn, damn. Uh-oh! The other two judges come to look it over.

Gordon says he can see that the chicken is still raw. He tells him he’s so disappointed. He says that a thigh takes 20 minutes in the oven minimum. He tells him he didn’t expect him to serve him undercooked chicken. Joe says the Romesco is as good as what he serves in his Spanish restaurant and reminds him he told him to cook a back-up thigh. Troy is full on crying into a towel – he’s devastated and disappointed.

Dara brings up her soy and ginger wings with pickled vegetables. Graham says that the way she cut the wings down is beautiful. He loves the color and then tastes the chicken. He says it could be the best thing he’s had in the entire show. He tells her it’s amazing and that she did a great job. Joe tastes next and says – wow! Crunchy amazing flavors and says it’s good enough to be a restaurant signature dish.

Alexander comes down next. He has pâté with bacon and serves it on a board that he says compliments the rustic nature of the dish more so than a plate. Gordon is very impressed and tells Alexander that he should never back away from a challenge. He offers him a job as a junior sous chef at his Savoy restaurant. Joe tells him that it’s remarkable and truly a masterpiece. He takes back an extra bite to nosh on.

Jack is last. He says he really wants to impress the judges. He has chicken breast roulade stuffed with goat cheese and sun dried tomatoes and a side of potatoes. Gordon asks why he was so adventurous and Jack says he’s an ambitious cook. Gordon tastes and says he’s at a loss for words. He says he’s amazed at how technical a dish he’s done at just 10. He high fives him. Alexander smiles – he’s pleased for Jack – that’s good sportsmanship. Grahams says it’s awesome and his best dish so far.

Gordon tells the kids they’ve just elevated the standards and that tonight’s decision will be one of the most difficult they’ve ever had to make. Graham says it’s too close to call. The kids hug it out and wait for the decision. Jack comforts Troy who is still crying. Troy tells Dara he thinks it will be her and Jack.

The judges call the four kids down. Joe says they are all accomplished and terrific but only two can go on. Dara says she feels like all three did an amazing job (sounds like she’s counted out Troy already). Troy looks like a deer in the headlights.

Graham announces the first finalist will be Alexander! OMG – that means Dara or Jack is out of it. Surely Troy won’t move forward. Gordon tells Alexander he acts like Julia Child’s grandson and says he has an amazing connection to food. He wishes the other three good luck and heads upstairs.

He tells the other three that they are extraordinary and have achieved so much and shouldn’t feel bad. Gordon announces the other finalist will be Dara! Aww. Little Jack’s out of it and Troy lost on his undercooked chicken. Dara is thrilled as she heads up to join Alexander. Jack bursts into tears. Gordon tells the two boys that are leaving that they have amazing futures and did phenomenal jobs in the competition. Gordon hugs a crying Jack and tells him he was brilliant.

We see a little montage of the boys’ past dishes. Troy says he’s proud of what he did and that we’ve not seen the last of him. The two guys head out as Dara and Alexander applaud for them. Jack says he’s sad now but it hasn’t broken his spirit.

Then the judges turn their attention to the finalists and tell them they are facing the culinary fight of their life to become the first ever Junior Master Chef!

The two finalists, who will vie for the $100,000 prize next Friday, are Alexander and Dara.