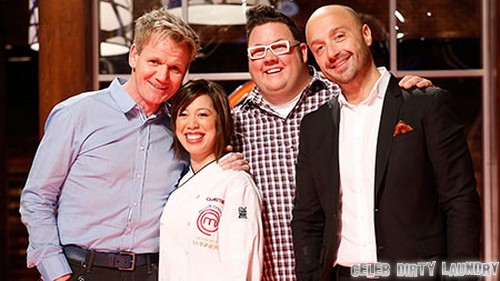 MASTERCHEF airs another 2-hour episode tonight on FOX with top “13 Compete/12 Compete.” On tonight’s show, former season 3 winner Christine Ha will be dropping by the the MasterChef kitchen. Then, the amateur chefs will have to prepare a wedding feast!. Did you watch last week’s episode? We did and we recapped it HERE for you.

Last week, British celebrity chef, Gordon Ramsay, acclaimed chef Graham Elliott and restaurateur Joe Bastianich welcomed GLEE cast members; Jane Lynch, Cory Monteith and Matthew Morrison who assisted the judges in choosing the winning team after they had to prepare a meal for the cast and crew of the popular singing show. Joe’s mother, legendary chef, Lidia Bastianich was also a guest judge for a pasta dish. Howard and Bime were the two hopefuls that were eliminated last week at the end of the challenges.

Getting eliminated is not pleasant and this week former contestant Marie Porter spoke out about alleged abuse by the three judges, she went so far as saying that a few voted out contestants even had suicidal thoughts! What do you think? Is she bitter from being eliminated, or could there be some truth in her allegations? Reps for MasterChef had their own take on the situation, “Contestants on MASTERCHEF are treated with the utmost respect and professionalism and we care tremendously about their well-being. The recent comments posted about the treatment of the contestants are completely without merit.”

Tonight an all new show airs and I can’t wait to see what former winner of season 3 MasterChef has in store for the contestants. Two more chefs will be going home tonight, personally I hope one of them is Krissi as I find her really annoying and disrespectful to everyone else in the competition.

Official Synopsis: The remaining contestants must think on their feet when they cook a mystery box challenge with the most unexpected ingredient and a limited pantry. Later, in the elimination round, Season Three Winner Christine Ha, the first ever blind contestant, returns to MASTERCHEF with a big surprise for the contestants. Then, the home cooks prepare an unforgettable meal for a wedding party. The winning team is safe from elimination, while the losing team faces a pressure test involving macaroons. In the end, two more home cooks will be eliminated.