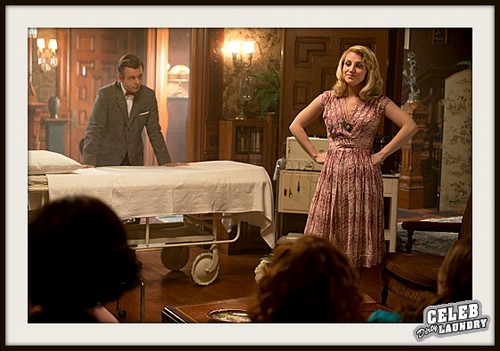 Tonight on Showtime MASTERS OF SEX continues with a new episode.  On tonight’s show called, “Race To Space” Masters blames Johnson when the sexual response study is forced out of the hospital. To continue his research, Masters moves the study to a brothel but soon realizes that to manage the chaos of the cathouse he needs Johnson’s help.

If you have not watched the show the show stars Michael Sheen and Lizzy Caplan as real-life pioneers of the science of human sexuality, William Masters and Virginia Johnson. Their research touched off the sexual revolution and took them from a midwestern teaching hospital to the cover of Time magazine and multiple appearances on Johnny Carson’s couch. He is a brilliant scientist out of touch with his own feelings, and she is a single working mother ahead of her time. The series chronicles their unusual lives, romance, and unlikely pop culture trajectory.

On tonight’s show on the heels of Masters’ proposal that they participate in the sexual response study, Johnson considers the best course of action to keep her job – only to find she no longer has one. The study has been forced out of the hospital and Masters believes Johnson is to blame. As Johnson fights to save her job and struggles to care for her kids, Masters moves his study to a brothel. But Masters soon discovers that the chaos of the cathouse is unmanageable without Johnson’s help.

We will be covering Masters of Sex tonight at 10PM EST so don’t forget to come back to this site for our full and detailed recap.  Make sure to refresh often to get the most recent details.  While you wait for the recap let us know how you are enjoying this season of Masters of Sex.

Viewing every possible scenarios in which she turns down Masters’s proposal all proved to be for nothing. It seems Ethan was the one to spill the beans and Masters blame Johnson for it. She was the one that slept with Ethan and told him how the study was progressing. Now that the college found out how far they were willing to go they’ve pulled the plug. Also Jonson is fired. Masters can’t even stand to look at her after this.

She has to stay on at her desk until her replacement is hired but know she’s not wanted.

Masters carry on his day by looking into his wife’s case. He’s taken over for Ethan; he wouldn’t let that man touch his wife now even if he was dead. Yet Libby’s case went from easygoing to cold and sterile. Masters has ordered a redoing of all of Ethan’s tests fully knowing the problem lays with him. Ethan meanwhile doesn’t know why he was essentially fired.

Johnson fills him in when she returns to the office with Henry. Her son got suspended from school for spitting on his teacher. So Ethan did catch her at the wrong time. He’s sorry for hitting her and nothing else because he claimed he never went to Scully to report them. She takes this discovery to Masters but he won’t listen. He’s already written her off.

He didn’t even tell her where the study moved to. She just sees Betty there working at the office. Betty got the job in exchange for opening the cat house to his study. It’s a good thing she was there too. She was able to tell the subjects the study moved much to their disappointment. They really were looking forward to their participation.

On the drive Masters realize it’s time to come clean with his wife about the study. She understands its clinical and still hates it. He must be drawn to this if he can’t get it at home. She wants him to quit it but doesn’t come right out and says it. Instead she says he’s risking his job by getting arrested.

Johnson finds out from Betty that Masters is conducting research at a whorehouse. She’s not the only one to find out. Scully found out as well. He wants Masters to stop going to that place for his data. Although he’ll only allow the study back at the hospital if Masters stops using live couples. Masters refuses. He rather risk his reputation than that.

Johnson shows up at the house before the doctor arrives. She preps the girls and helps them understand what they’ll be doing. Masters sees how much she helps and doesn’t ask her to leave.

Betty decided to blackmail Masters one more time. She wants o untie her tubes without any questions on why from Masters.

Masters sent Johnson to talk to Betty. She admits she met a rich guy and he thinks she’s a good girl that works at a hospital. She wants to be normal and have a family. Johnson has kids then why can’t she?

Johnson understands and she tells Masters to do the surgery. The why should it matter to him. He’s always been a man of science to begin with. Why should this be any different? Plus she knows the real reason why he’s angry at her. Neither of them will come out and say but they both know.

When she enters home to relieve the babysitter she didn’t know that Ethan was watching her from his car.